Obama to Announce Supreme Court Pick at 11 This Morning 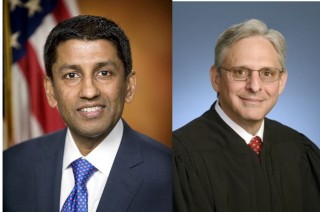 President Barack Obama will make history Wednesday morning by announcing his pick for the U.S. Supreme Court at 11 am at the White House Rose Garden. Judge Sri Srinivasan or Judge Merrick Garland are on the narrowed down list of potential Supreme Court nominees, according to Reuters. The team who vetted the candidates reportedly finished their work on Tuesday.  Many court observers predicted that Obama would waited until after Tuesday’s primaries to make an announcement, and before Congress left for recess on Friday. Obama is hoping Republicans will approve his pick to replace the conservative Justice Antonin Scalia. Of course, Senate Republicans have already promised to thwart any and all efforts.

Interestingly, Srinivasan and Garland both serve on the U.S. Court of Appeals for the District of Columbia Circuit, which is often considered a stepping stone to the Supreme Court. Here is some more information on each of the potential picks: