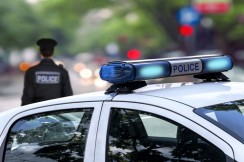 If you saw the disturbing video of Laquan McDonald, a 17-year-old black man, you may have wondered why there was no sound. The police dash-cam video, which shows McDonald as he is shot 16 times, has no sound, nor do videos from four other squad scenes that were on the scene that night.

While it’s certainly possible for a glitch to cut the mic of one cop, it’s highly unlikely for it to happen to four, or more. According to a DNAinfo Chicago review of more than 1,800 police maintenance records, Chicago police officers have hid microphones in glove boxes, removed batteries from devices and looked away as microphone antennas went “missing.”

Chicago Police officials seem to have determined the cause of so many silent videos: intentional mic destruction. Officials also blamed the lack of sound on officer error. In light of the report, “officer error” seems suspicious in and of itself. The Chicago Police Department has made a concerted effort to replace or repair broken microphones and dash cams.

For example, as is standard practice, Chicago police technicians reportedly fixed a wiring issue in the dash cam of police vehicle No. 6412 in June 2014. Vehicle No. 6412 was the squad car of Jason Van Dyke, the officer who fatally shot McDonald, and his partner Joseph Walsh. Just a day after it was fixed, Vehicle No. 6412 was reported to have a nonworking dash cam again. Technicians deemed the damaged “intentional.”

Less than two weeks later, McDonald was killed. Guess which vehicle did not have working audio at the scene? You guessed it, Vehicle No. 6412.

Sound can be central to understanding what happened at a crime scene, Ed Primeau, a Michigan-based audio and video forensics expert, told the AP in December. With sound available, investigators can better understand the mentalities of cops in high-pressure situations.

The silent video in the death of McDonald has already raised questions. “When you’ve got a standup cop with nothing to hide, the dash-cam is his friend,” said Gregg Stutchman, a video forensics specialist of 23 years. “But for cops who aren’t quite as standup, it would make sense that they wouldn’t want things recorded.” Stuchman also expressed concerns that a lack of audio is a red flag with possibly intentional motivations.

On the same day the video of McDonald’s death was released, Van Dyke was charged with first-degree murder by the Cook County State’s Attorney Office. The former Chicago police officer has pleaded not guilty and currently faces six counts of first-degree murder and one count of official misconduct.

Van Dkye’s next hearing is scheduled for January 29.