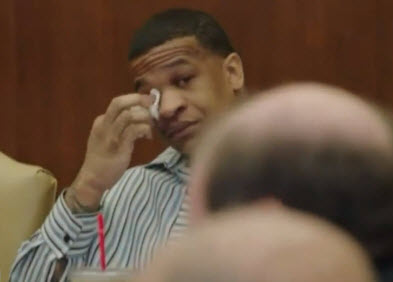 The long awaited trial of Quinton Verdell Tellis in the burning death of Jessica Chambers finally got underway in Mississippi on Tuesday.

District Attorney John Champion gave a lengthy and powerful opening statement that lasted a little over an hour. Calling the victim “a beautiful blonde haired 19 year old,”  Champion said that approximately two weeks prior to December 6,  2014, she met a man that would “change her life and the course of her family.”

He went on to explain that Tellis was charged with capital murder only because”a death occurred as the result of another felony.” In this case that death occurred as a result of her car being set on fire. He also stated that although she said the name “Eric” (not Quinton the accused)  as her killer, her esophagus was so badly burned that her speech was distorted. The district attorney added that photos of her esophagus would be shown to the jury at a later date. He went on to explain that cellphone RTTs or “pings” would take a very important role in proving the State’s case.

Defense attorney Darla Palmer‘s opening statement focused mainly on the fact that  Chambers spoke to eight or more first responders at the scene stating the same to all that “Eric set me on fire” and “Eric did this to me.” She stated that cell phone records are not always reliable and that she will show that at the time of the fire, her client was 5 miles away in the town of Batesville purchasing a Green Dot card.

“That’s my baby girl” was the tearful answer of Lisa Chambers, mother of the victim, when shown a picture of her daughter Jessica. She testified about the day of the fire. She says her daughter was awakened from a nap by either a call or a text on her cell phone in the early evening hours on December 6.  Shortly after that,  her daughter left the house. Later that evening a 6:48 her mother received a call from Jessica saying that she was going to get something to eat. Lisa Chambers pointed out that there was no music or background noise which was highly unusual for her daughter leading the senior Ms. Chambers to believe her daughter was not alone.

The next witness to take the stand was Kesha Myers. Ms. Myers testified that she was a close friend of Jessica Chambers and was introduced to Quinton Tellis through her. She also stated that Tellis was in the car when Chambers picked her up at about 10 that morning.  The trio rode around to “just hang out” and smoke marijuana for about 1-2 hours. They dropped Tellis off first on Hwy 51 near M & M grocery. She elaborated that Chambers also got out of the car and exchanged a hug with Tellis adding that although the hug appeared to be reciprocated, she had the feeling Chambers was afraid to hug Tellis.

Next on the witness stand was Glenn Williams. He testified that he and Latroy Rudd we’re traveling to Courtland from Lambert, MS, when they saw a fire. He said he had to go up and down two hills before they got to the scene. He also added that he looked behind him down the road to see if anyone was around. The two had been drinking beer and we’re nervous about driving so had chosen to take the back roads as to avoid police. He also said that he did not know the number to call for the fire department so Mr. Rudd was the one that made the initial call. The two stayed on the scene for about 2 minutes leaving before ever seeing Jessica or anyone else.

A very emotional Cole Haley took the stand next. He was the Fire Chief at the time for Courtland volunteer fire department. While wiping tears from his cheeks, he recounted seeing Jessica for the first time.  He said he saw her walking towards him, arms outstretched, saying “Help me. Help me”.  He stated that even though he knew Jessica, the person approaching him from the scene was “unrecognizable.”  He said his first inclination was to grab a blanket and cover her because she was only wearing a pair of panties.  He asked her name and said at first he thought she said Jessica Chambers but after noticing the car was a compact realized she was attempting to say “Chambers”.  Ms. Chambers told him she had been set on fire and asked for water.

During cross examination by the defense, Haley was asked to read aloud his written statement he made of the incident. The defense was able to point out that he had stated that Jessica said the name “Eric” when asked who did that to her even though  Haley had denied that during his testimony. Haley has since left the fire department.

The last witness to take the stand today was Courtland Fire Captain Jody Morris. He said the first time he saw the victim she looked like a “zoombie” walking out if the woods. When asked to elaborate he said that her hair looked like someone who had stuck their finger in a light socket, that her face was black and that her sinus cavities were dangling from her nose. He said he asked her name and she answered “Jessica Chambers.” He asked if anyone was in the car with her and she answered no. Then he asked what happened to her and she answered “Eric set me on fire” He said her voice was real deep and her lips were “black and dried up”. In his report he wrote she told “us Eric set her on fire” but that she didn’t know Eric’s last name. During cross examination,  the defense had him read aloud his statement.  The defense asked if Cole Haley was one if the “us” and Mr. Morris admitted he was.

With that court was adjourned until Wednesday morning at 9 am.