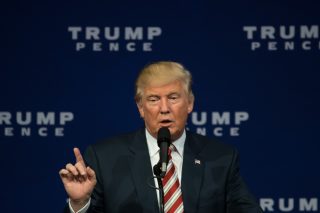 The New York Times‘ report over the weekend regarding Trump’s taxes is continuing to make waves today in the cable news world. The Times obtained a portion of Donald Trump‘s 1995 income tax returns, which experts say may have allowed Trump to avoid paying federal income taxes for the last 18 years. Trump surrogates, like Corey Lewandowski, and Trump himself, claim that The Times illegally published the returns. As we’ve reported earlier, they may have a point, as federal law does prohibit the publishing of tax returns without authorization. However, there are clearly some First Amendment issues at play that could help The New York Times win any potential case. Understandably, there is some confusion over all of this. Pundits on television continue to cite a case that really wouldn’t help The Times at all in an effort to defend the newspaper. In fact, this morning, a number of pundits and anchors, including CNN’s Alisyn Camerota used a famous case, which has been come to be called The Pentagon Papers, as justification for why it is legally sound for The Times to publish the taxes. The only problem: That case is not really justification at all.

We checked in with our boss’s dad, famous First Amendment attorney Floyd Abrams, who also happened to served as counsel for The New York Times during the Pentagon Papers case. He pointed out that the difference is that in that case, The New York Times was dealing with an executive order that restrained the newspaper from printing the then-classified Pentagon Papers. In that 1971 case, the Supreme Court ruled that in order to exercise prior restraint, the Government must show sufficient evidence that the publication would cause “grave and irreparable” danger. But here’s where the pundits are going wrong in their current analysis. The Trump Tax case is different from the Pentagon Papers because The Times already printed the article over the weekend—so therefore prior restraint does not come into play.

The relevant body of First Amendment law that would be applied is not that of prior restraint—the Times has already published so there’s nothing to restrain any more—but cases relating to efforts to punish the publication of truthful information about matters of public interest. Those are cases that have held unconstitutional, on First Amendment grounds, statutes such as the following: barring publication of charges before a judicial panel passing on the alleged misbehavior of judges; barring publication of the names of juveniles before juvenile courts (I argued those two cases in the Supreme Court); and barring publication of the names of rape victims. None of those cases laid down absolute rules. Neither did the most recent case in this line—the Bartnicki case referred to in your piece. But taken together, all the cases make it extremely unlikely that the Times could constitutionally be held liable for publishing such a newsworthy story, a month before a presidential election, about a candidate for President.

In Bartnicki v. Vopper, the Supreme Court addressed this very issue. The Justices were assessing whether a radio personality could be held liable for playing illegally intercepted phone calls on the radio. The Court held the First Amendment protected the disclosure of the intercepted communications by parties who didn’t participate in the illegal act.

“In this case, privacy concerns give way when balanced against the interest in publishing matters of public importance,” wrote Justice John Paul Stevens. “[A] stranger’s illegal conduct does not suffice to remove the First Amendment shield from speech about a matter of public concern.” However, the rules aren’t absolute, as Abrams explained. But one thing is for sure, the case of The Pentagon Papers is probably not the absolute case to cite if you are trying to defend The Times.