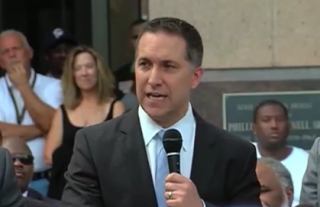 When Florida police charged Donald Trump’s campaign manager, Corey Lewandowski with simple battery over grabbing a reporter’s arm, a lot of people wondered how. While video of the alleged incident showed that Lewandowski may have technically put his hand on the arm of former Breitbart.com reporter Michelle Fields, it hardly looked like a criminal act worthy of up to a year in jail, and there are a number of possible defenses that come to mind. As a former prosecutor myself, I was rather surprised at the charges.

So why the criminal charge in the first place? Well, a look at the Palm Beach County State Prosecutor may shed some light on the matter. Dave Aronberg, whose office is handling the case, is a Democrat and former state senator, who also happens to be a Hillary Clinton backer, the Boston Herald reports. Aronberg has been listed among Clinton’s “Florida Leadership Council” since November, and campaign finance records show that he donated $1,000 to Clinton in January.

Now, that’s not to say that the charges are um, trumped up, so to speak. Lewandowski certainly appeared to grab Fields’s arm against her will, which is enough to satisfy the requirements for the police to arrest him for battery. But prosecutors have the discretion to determine which cases are worth pursuing, and what charges are appropriate. For instance, instead of charging Lewandowski with battery, which is a first degree misdemeanor with a maximum penalty of one year in jail, they could have charged him with disorderly conduct, a second degree misdemeanor in Florida, that has a maximum of 60 days.

Now, it’s possible that prosecutors hadn’t seen the video yet when they made the decision, and this evidence could affect their decisions going forward. Or maybe they were persuaded by the bruises shown in the image Fields posted on Twitter after the incident. If they believed that Lewandowski injured Fields, then a misdemeanor charge would absolutely be appropriate.

But the political connection between Aronberg and Clinton may say it all. Just as a prosecutor has the discretion to go easy on someone if they see fit, they can also come down hard on someone, as long as it’s within the confines of the law. Since Lewandowski’s alleged actions certainly appear to qualify as battery, he just might have an uphill battle to climb. At least he can hope for Trump to pay his legal fees.

Update 3/30/16 11:37am: Mike Edmonson, a spokesperson for Aronberg’s office, told the Washington Post that prosecutors have not yet received the case file from police, and have yet to determine how they will proceed.