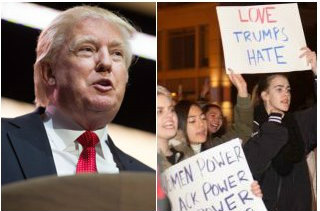 No mention was made about the Rogin report. Our original story from Monday can be found below.

According to Washington Post columnist Josh Rogin, President Donald Trump may be working on an executive order that would be a major step back for LGBT rights in this country.

“EO could allow fed employees to refuse to serve LGBT based on belief marriage is b/t man & woman or gender is immutable from birth,” Rogin wrote late Monday afternoon.

I’m told reliably there is a draft Executive order on LGBT issues including adoption. Details and timing unclear.

More: EO could allow fed employees to refuse to serve LGBT based on belief marriage is b/t man & woman or gender is immutable from birth

This news comes after the president issued a series of controversial executive orders during his first week in office. On Friday, he signed an order banning citizens of seven Muslim-majority nations and suspending a refugee program. The Council of American Islamic Relations, along with many other civil rights organizations, have sued. CAIR claims the EO violates the First Amendment’s Establishment Clause.

If Rogin’s report holds out, this LGBT Executive Order would touch religion from another angle. In Obergefell v. Hodges, the Supreme Court  legalized gay marriage. The reported EO could plausibly shield federal employees with beliefs against gay rights, but precise legal ramifications of such a policy remain unclear until the actual text gets published.

We reached out to a Trump spokesperson for comment. Press Secretary Sean Spicer declined to talk about the rumored EO when asked about it on Monday.

“I’m not getting ahead of the executive orders that we may or may not issue,” he told a Washington Blade reporter. “There’s a lot of executive orders, a lot of things the president has talked about and will continue to fulfill, but we have nothing on that front now.”

An NBC reporter later posted this:

During his speech at the Republican National Convention, then-candidate Trump said he’d protect LGBT people against Muslim terrorists. He said in April that transgender people should be allowed to use the bathrooms “they feel is appropriate,” and that North Carolina’s controversial HB2 was flawed.

Vice President Mike Pence has fought policies that expanded legal protection for LGBT rights. In 2006, the then-Senator for Indiana supported constitutional amendment defining marriage as being between a man and a woman. He also opposed the repeal of “Don’t Ask, Don’t Tell,” a 2007 federal law designed to protect gays and lesbians in the workplace, and the recent Obama Administration guideline saying transgender students should use bathrooms matching their gender identity.