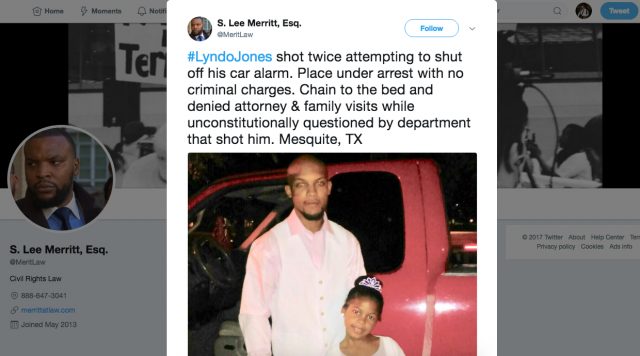 Police in Texas shot and arrested an unarmed black man last week because they thought he was trying to break into his own car.

Lyndo Jones, 31, was then charged with evading arrest by the same cops who shot him. That charge was dropped on Tuesday of this week.

On the night in question, Jones was attempting to deal with a malfunctioning car alarm inside his truck. Officers with the Mesquite Police Department arrived on the scene and instructed Jones to exit the vehicle.

By all accounts, Jones voluntarily complied with that request–but then the stories diverge.

Police claim that Jones and officers got into some sort of altercation or scuffle prior to Jones being shot.  Mesquite Police Department spokesman Lt. Brian Parrish said it took three officers to “subdue” him and that he tried to “run” away before being shot twice by Officer Derick Wiley.

Jones contests that version of events. One his attorneys, Lee Merritt, said:

Within 10 seconds of their arrival, he had been shot in the stomach. While on the street suffering from his wound, officers attempted to perform a cavity search and he reacted to that, and he was shot a second time in this back.

Merritt also noted that initial police reports failed to include the fact that Jones was sitting in the truck when police arrived. Of that alleged oversight, Merritt said, “That was not a mistake. That was an intentional misrepresentation to the public.”

Another of Jones’ attorneys, Justin Moore, added, “That truck was his. How can you burglarize your own car?”

According to the local CBS affiliate, after the arrest, Jones was treated for his wounds at a hospital in Dallas and then chained to the bed.

Moore also claims that he was forcibly removed from a room where Jones was being interviewed by police–which, if true, would likely be a flagrant violation of Jones’ 5th Amendment right to counsel.

Police say they dropped the charge against Jones in order to help him recuperate but that they may refile the charge at a later time. The Dallas County District Attorney’s Office is currently investigating the shooting.