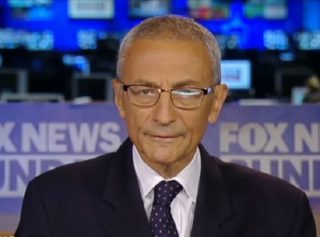 Hillary Clinton‘s campaign chairman John Podesta says that “something is deeply broken at the FBI,” and that the federal government needs to do something about it. Podesta’s verbal assault against federal investigators was published by The Washington Post Thursday night.

The op-ed was a response to inconsistency in the FBI’s response to two different cases: Clinton’s private email system and alleged Russian cyberattacks against Clinton and supposedly for Donald Trump‘s benefit. Podesta cited a Justice Department Insprector General’s “damning report” from the summer that called the FBI out on not prioritizing computer threats, and a former CIA acting director who called the alleged Russian actions “the political equivalent of 9/11.”

Podesta contrasted how when the FBI first discovered possible Russian attacks against the Democratic National Committee in September, they failed to tell DNC officials, opting to just call their help desk, but with Clinton’s email server, they carried out a lengthy investigation and flew to Denver to conduct interviews. FBI Director James Comey went out of his way to address the public regarding his findings in the Clinton case, and 11 days before the election, he announced continuing investigation of new evidence after the case had seemed to be over. This was despite Comey not speaking out about Russia so close to the election because it was too political. Podesta called the difference in treatment of the two cases “downright infuriating.”

He accuses the feds of not taking the Russian case seriously enough even now, with rumors that Vladimir Putin himself was involved, and that a Trump adviser met with a Putin staffer earlier this year.

In order to help rectify the situation, or at least mitigate the damage, Podesta is calling for President Obama’s administration to declassify materials regarding Russian hacks and inform electoral college members regarding possible Russian interference in the general election. The electors are scheduled to meet on Monday. Podesta also wants Congress to get involved and conduct a bipartisan probe similar to the 9/11 Commission to get to the bottom of this.

“The public deserves to know exactly what happened,” Podesta said, “and what can be done to prevent future attacks.”

Podesta has a personal stake in the matter as well, after his own emails were hacked and leaked, with Russian actors believed to be behind it.