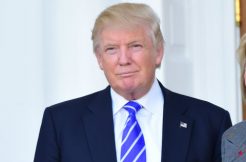 How will Donald Trump’s oil stock affect his policy on the Dakota Access Pipeline? As you may know, the President-elect is a rich guy with a lot of investments. He’s apparently invested some money with the Dallas-based Energy Transfer Partners. The problem is, that company is the one building the controversial project.

“Trump’s investments in the pipeline business threaten to undercut faith in this process, which was already frayed, by interjecting his own financial well-being into a much bigger decision,” Sharon Buccino, director of the land and wildlife program at the Natural Resources Defense Council, told the AP.

Congressman Raul Grijalva (D-Arizona), the Senior Democrat on the House Natural Resources Committee, blasted the President-elect, and said the stock choice reflected a pattern seen in his controversial transition team.

“You have climate [change] deniers, industry lobbyists, and energy conglomerates involved in that process,” Grijalva told the outlet. “The pipeline companies are gleeful. This is pay-to-play at its rawest.”

During the presidential campaign, Trump promised to “lift the restrictions on American energy” to create jobs.

The pipeline is planned to run from North Dakota to Illinois, cutting under Lake Oahe, which is right by the Standing Rock Indian Reservation. Members of the Standing Rock Sioux Tribe are concerned about the pipeline damaging their drinking water and local cultural sites. Protests have sometimes turned violent, with authorities arresting over 500 people since August. Recently, one woman almost lost her arm in an explosion allegedly caused by a concussion grenade from authorities.

Construction is delayed as the Army Corps of Engineers undergoes talks with the Sioux, but Energy Transfer Partners have asked a federal court to let them finish construction.

As mentioned before, Trump’s stock in the Energy Transfer Partners is down from 2015. However, he owned at least $61 million in stocks and funds according to a FEC disclosure report. There’s also the revenue from his real estate ventures, and golf courses. and resorts. It’s typical for President-elects to divest from business ventures, and put assets into a blind trust. During the election, Trump was asked about doing such a thing, and said he’d put his businesses in the hands of his children.

He has continued to say that the president of the United States “can’t have a conflict-of-interest.” Nonetheless, there have been concerns that he still might violating good government principals. Legal scholars continue to argue over whether he’s in danger of violating the Emoluments Clause of the Constitution.

[image via a katz and Shutterstock]