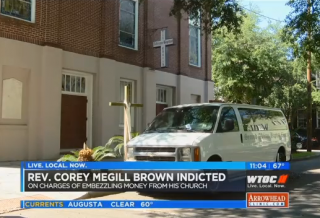 A Georgia church’s former pastor was indicted for allegedly taking more than $250,000 of tithes and offerings, the Savannah Morning News reported.  Rev. Corey MeGill Brown is accused of diverting the funds from the Second African Baptist Church in Savannah into a personal account from March 2005 until February 2014.

The secret account was named “Romans 12,” after a New Testament chapter that discusses gifts. The indictment accuses Brown of using the money to make purchases from places including Victoria’s Secret, On Time Fashions and the Saddleback Leather Company.

According to WTOC, the FBI learned about Brown’s operation after a church member wanted to see a listing of his donations over the course of a given year, but the church couldn’t provide the information. Church trustees then noticed that many donations weren’t appearing in their accounts.

During this time, Brown served on the city of Savannah’s ethics committee, and was a chaplain for local police. He was vacated from both positions after news of the investigation came to light.