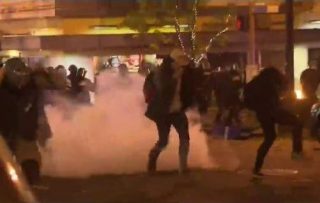 Protesters in Portland, Oregon have been demonstrating against the election of Donald Trump since he won the presidency last week. More than 100 have been arrested, and according to KGW8, only a fraction of them actually voted.

This is disgusting. What does it say about our country when people are willing to get arrested for complaining about an issue, but they can’t be bothered to actually do something about it? It looks like these protesters want to be heard simply because they like the sound of their own voices, ignoring the fact that the way their voice can be heard best is by showing up at the polls and filling out a ballot.

I have plenty of respect for people who take action and stand up for their beliefs in order to encourage change. But if all they’re doing is whining about an election result that can’t be changed, when they could have done something about it last week by actually participating in our democracy, I have no respect for them. If they really want to do something, they can vote in the mid-term elections in 2018. Until then, I don’t want to hear it.