Obama to Nominate Scalia’s Replacement When Senate Returns Next Week 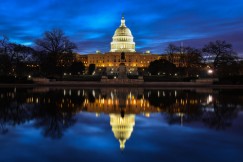 President Barack Obama is likely to nominate his choice for the next Supreme Court Justice after the Senate returns to session next Monday, February 22. There will be no announcement on who the nominee will be before then, but it is expected to come soon, according to Obama’s deputy press secretary Eric Schultz.

“Given that the Senate is currently in recess, we don’t expect the president to rush this through this week, but instead will do so in due time once the Senate returns from their recess,” Schultz said. The White House has vowed to nominate a Justice despite Republican pledges to block any nomination.

A new U.S. Supreme Court judge is expected to be nominated after the unexpected death of Justice Antonin Scalia, a Conservative icon and constitutional originalist. Scalia was found dead at a Texas ranch on Saturday morning of natural causes