O.J. Detective Mark Fuhrman: The Tapes and Pleading The Fifth 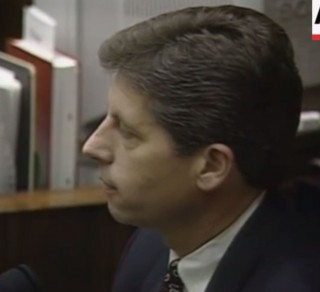 Tuesday night’s episode of The People v. O.J. Simpson centers around the infamous Mark Fuhrman tapes, and his decision to assert his Fifth Amendment rights during the trial.  Fuhrman, who was the LAPD detective during the murder investigation of Nicole Brown Simpson and Ron Goldman, was accused of using racial slurs repeatedly in a series of tapes that were recorded by Laura McKinny. McKinny was working on a screenplay about female police officers, and had been interviewing Fuhrman as part of her research. She recorded about 13 hours of interviews over a 9-year time span. Simpson’s attorneys also accused Fuhrman of planting a bloody glove outside of O.J. Simpson’s residence to bolster his case against Simpson.

Here is video of Fuhrman’s testimony from the trial in which he denied that he had used any racial slurs in the last ten years:

The video below is the testimony of Laura McKinny in which she described how she met Fuhrman while on her laptop at a cafe. She also gave her reaction to how she felt when Fuhrman used the offensive terms during the course of their one-on-one interviews.  Even though McKinny recorded 13 hours of interviews between 1985 and 1994, Judge Lance A. Ito only allowed two examples of racial slurs to be heard before the jury, according to The New York Times. The tapes were used to impeach Fuhrman’s earlier testimony in which he said that he had not used racial slurs like these in the last 10 years. Here is what was played:

The tapes in which Fuhrman can be heard saying the n-word can also be heard in this trial video excerpt:

During the trial, O.J. Simpson’s defense attorneys contended that Fuhrman planted the infamous bloody leather glove, and attorney F. Lee Bailey asked him that very question when he was on the stand. Fuhrman was asked specifically, “have you ever planted or manufactured any evidence in his case?” Fuhrman famously asserted his Fifth Amendment privilege not to incriminate himself:

On February 1997, in an interview, Oprah asked Fuhrman why he decided to plead the Fifth. “Believe me that was the toughest thing I ever did,” Fuhrman said, “But he had a lot of other questions prior to that. A lot of people don’t understand the Fifth Amendment, it is not a pick or chose. It is a yes or a no. You take it or you don’t. Once you answer, the question, you open the door to the rest of the question.” Watch below:

In addition to the gloves not fitting, many court watchers contend that Furhman’s decision to plead the Fifth, and his apparent racist language helped chip away at the prosecution’s case, and could be among the reasons that Simpson was ultimately acquitted.