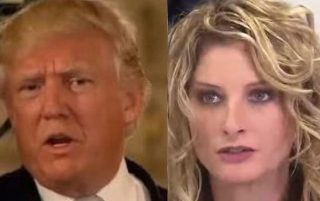 Former Apprentice contestant Summer Zervos is suing President-elect Donald Trump for defamation, alleging that he falsely stated that Zervos fabricated sexual assault allegations against him. The lawsuit, claiming that Trump made defamatory statements against her after she made public allegations that he touched her inappropriately, was filed Tuesday afternoon, three days before Trump’s inauguration. With Trump set to take office on Friday, people may be wondering: what happens if the trial is pending when Trump is sworn into office? Can a sitting President be sued, even if it’s for something he allegedly did before taking office?

While it’s unclear whether a President can face criminal prosecution while in office (and there are opinions, including from the Justice Department, that say no), U.S. Presidents are not immune from civil lawsuits. However, that doesn’t mean that they must face them while they’re in office.

Ironically, the Supreme Court ruled on this issue in a very similar situation. In the landmark Clinton v. Jones, Paula Jones had sued President Bill Clinton while he was in office, alleging that Clinton sexually harassed her while he was Governor of Arkansas. Clinton argued that any action against him should be held off as long as he was in office. The Court disagreed, ruling that the President can indeed be sued for alleged actions that took place prior to taking office or that are not related to the Presidency. Justice John Paul Stevens wrote in his 1997 opinion that while Presidents may be protected from liability regarding official actions in office so they can “perform their designated functions effectively without fear,” that protection does not extend to unofficial conduct. Stevens said that courts have discretion to determine whether to stay proceedings until a later date, or move forward right away.

Professor Edward Foley, director of Election Law @ Mortiz  at The Ohio State University’s Moritz College of Law, told LawNewz.com for a previous article that situations like this could be decided by courts on a case by case basis. On the one hand, “the judiciary will want to look to the principle that no one is above the law,” Foley said. On the other hand, there is “the risk of a civil lawsuit being a genuine distraction such that it outweighs the interests of the litigants in the civil suit.” The judiciary would exercise their discretion, he said, given that “the President is the chief executive of the nation,” and shouldn’t have to face the distractions of litigation unless it’s truly necessary. Professor Rick Hasen from UC-Irvine has said in the past that “any court that didn’t act very deferentially would likely be reversed by an appeals court or the Supreme Court.”

So what about Zervos v. Trump?  Will the case keep going, or will the court put it on hold for the duration of Trump’s term in office? Like the Paula Jones case, this also involves sexual allegations against a President, but Zervos’ lawsuit is for defamation, not the actual sexual acts. A court might determine that defamation, while a serious matter, is not quite as severe as a sexual harassment claim like Jones’. Then again, a court could find that this case is just as serious as Jones and force the Trump to deal with the lawsuit while he starts his new job.

So Trump would not be immune from a civil case like this one while in office, but the judge would have to determine whether it’s worth going forward right away or waiting until his term is over. Conventional wisdom would likely lean towards the case being put on hold, but if there’s anything that last year’s election and Trump’s rise to the presidency has shown, it’s that anything can happen.