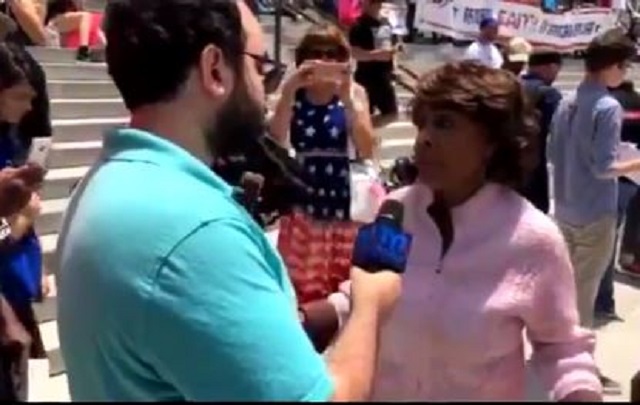 On Saturday, Michael Tracey, a correspondent for The Young Turks, tweeted a story of an encounter he had while interviewing Rep. Maxine Waters. Tracey claimed that the Congresswoman from California “shoved” him when she walked away from an interview, a description that is questionable at best, and downright false at worst.

Rep. Maxine Waters just shoved me and angrily stormed off as I asked her questions. (Not a violent shove but she initiated physical contact)

Notice how in Tracey’s tweet, he qualifies Waters’ action as being nonviolent, but still deems it necessary to point out that she initiated contact. He also goes on about it for another eight tweets. Now, when I read that someone shoved another person, I assume that the person placed their hand on the other person’s body and knocked them back.

Seriously? All Waters did was push Tracey’s microphone out of her face so she could walk past him, incidentally making contact with his wrist in the process.

Waters herself responded to Tracey’s version of events during an interview with MSNBC’s “AM Joy.”

Waters told host Joy Reid that Tracey’s account was a fabrication, saying, “he just lied. If you look at the video, it shows you, there was no pushing. I walked away from him.”

Sure, in a longer statement, Tracey tried to back off a bit by saying that it wasn’t an assault or any other kind of criminal act, but that hasn’t stopped some people from arguing otherwise. LawNewz.com contributor Robert Barnes tweeted that what Waters did is indeed criminal, at least technically speaking.

Actually, what @mtracey describes is a criminal battery by Maxine Waters, under California state law. https://t.co/oYZJUruJ6k

And yes, Tracey was in Waters’ way. Tracey claimed he “wasn’t meaningfully impeding her path.” By throwing in the word “meaningfully,” he is basically admitting that he was impeding her path at least a little bit. All Waters was doing was getting a microphone out of her face in order to clear her path.

As far as the separate crime of assault? Don’t even think about it. That one requires an “unlawful attempt, coupled with a present ability, to commit a violent injury on the person of another.” I can’t imagine anyone thinking that Waters had the ability to violently injure Tracey by moving his microphone away.

Was Waters belligerent towards the end of the interview? Sure. Did the incident warrant Tracey crying about it on Twitter? Nope. Was it a crime? Absolutely not.