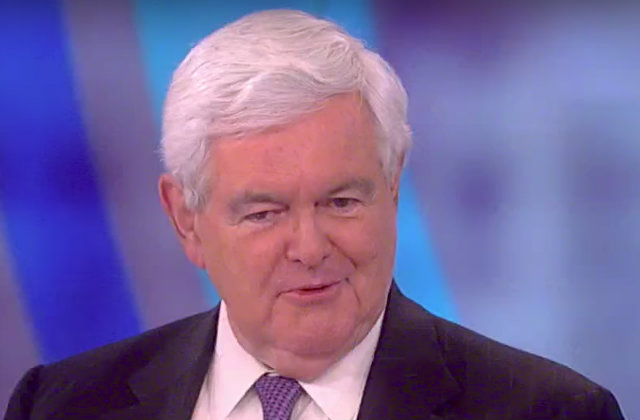 Despite criticism by Republican Newt Gingrich, there remains no proof that Special Counsel Robert Mueller‘s investigation is somehow partisan, at least under federal regulations.

The former House speaker has complained about Democrats getting hired for the probe. He argued that this is part of an effort to target President Donald Trump amidst the probe into Moscow’s interference during the 2016 election.

“He did not hire a single Republican in the first wave,” he said on Tuesday’s Good Morning America. This former Congressman, a major Trump surrogate during the 2016 campaign, complained that the top hires were Democrats.

The claim about party affiliation is not untrue. In a Tuesday report, CNN looked into Federal Election Commission records, and discovered that three out of five known members of Mueller’s legal team have given quite a bit to Dems: over $53,000 since 1988.

Another lawyer, Jeannie Rhee, has given over $16,000 to Democrats since 2008. Professionally, she has represented the Clinton Foundation and Hillary Clinton herself in lawsuits. She also gave to the 2016 campaign, too. Meanwhile, Andrew Weissman gave $2000 to the Democratic National Committee in 2006, and $2300 to Obama’s 2008 presidential campaign. Neither Rhee nor Weissman reportedly gave to the GOP.

So it would be entirely disingenuous to say these three lawyers are apolitical. But guess what: just because Mueller hired them all doesn’t mean he’s partisan. The special counsel is supposed to use Department of Justice guidelines to make personnel decisions, and this tells him to ignore party affiliations.

It is the policy of the Department of Justice to seek to eliminate discrimination on the basis of race, color, religion, sex, sexual orientation, national origin, marital status, political affiliation, age, or physical or mental handicap in employment within the Department and to assure equal employment opportunity for all employees and applicants for employment.

The law also says federal personnel should be chosen “without regard to political affiliation” et al. This is meant to be a purely merit-based system. Partisan feelings are to be ignored.

So yes, Mueller, a Republican nominated to become FBI Director in 2001 by President George W. Bush, hires a few Democrats to help run the probe. Big whoop. If asked why his team seems to lean blue, he could easily say he hired what he thought were the best people for the job. In fact, it would have violated federal regulations had he made a conscious effort to assemble a so-called “bipartisan” team.

Besides, it’s only a handful of people in question. It’s not like we have three dozen Bernie Sanders supporters suddenly probing Trump for obstruction of justice.

In any case, lawyers are trained to be impartial and analytical. Credible ones stake their careers on viable allegations, regardless of their personal feelings and ideology. Could partisanship skew the investigation? Anything is possible. People are corruptible, generally speaking. But Gingrich’s claim remains weak. He has to show that Mueller wanted Democrats (and NeverTrump Republicans for that matter) on staff because of political affiliation. He needs to show that Trump supporters are purposefully being overlooked based on who they supported in last year’s election. And most important, he needs to credibly show that the team is investigating in an improper manner.

Sorry, Newt, a 2016 campaign contribution to Clinton fails to prove that.

The former House speaker has presented no real evidence of partisanship. We can safely push aside this “tip of the spear” nonsense, and wait for investigators to do their job. Right now, all Gingrich has done is smear a team whose work is just getting started.