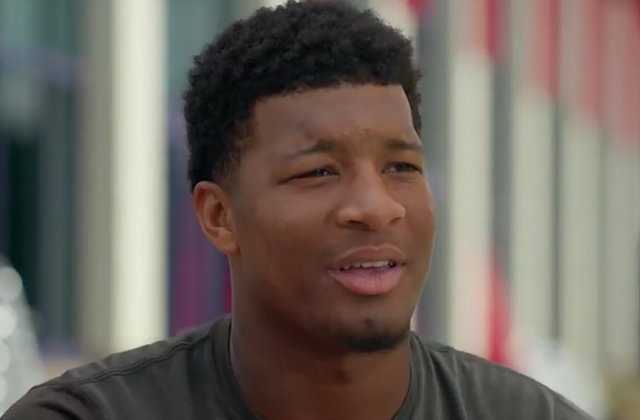 The National Football League is investigating Tampa Bay Bucs Quarterback Jameis Winston for groping a female Uber driver in 2016. The alleged victim got a letter from NFL special counsel of investigations Lisa Friel, according to BuzzFeed.

“The League has been informed that you may have been the victim of such a violation perpetrated by Tampa Bay Buccaneers player Jameis Winston,” said the letter. “The league takes allegations of this nature very seriously and has opened an investigation into this matter.”

The driver, described as “Kate” in the BuzzFeed article, told the outlet it happened March 13, 2016 in Scottsdale, Arizona. She said she got called at 2 a.m. to pick up a passenger. A couple of men put Winston in the front seat, she said. He was the only passenger, and allegedly acted “poorly” from the moment she started driving, she said. For example, she said he yelled homophobic slur at pedestrians. According to Kate’s account, Winston asked to get some food, and he later grabbed her crotch while they were waiting in line at the drive-thru for a Mexican restaurant. This left her frozen, and he allegedly only let go when she looked up and asked him, “What’s up with that?”

“I mean he’s an NFL quarterback and I’m 5 ft 6. I’m not prepared for that,” Kate told BuzzFeed, explaining that she was afraid. “So I completely froze.”

She complained to Uber after the incident, and told five people that it happened. BuzzFeed said they corroborated these with the company and those individuals.

Winston was banned from the service. BuzzFeed pointed out social media activity that showed him in the Scottsdale area for a charity event.

“We categorically deny this allegation,” Winston spokesman Russ Spielman told BuzzFeed. “It is our understanding the Uber driver was unable to identify the specific individual who allegedly touched this driver inappropriately. The only reason his name is being dragged in to this is that his Uber account was used to call the ride.”

He said this was the first he was hearing of the NFL’s letter.

The League confirmed the probe with BuzzFeed.

“The matter is under review,” said spokesman Brian McCarthy. “The allegation was shared with the NFL and we have reached out to Uber to request any information they may have.”

Law&Crime reached out to Professor Jodi Balsam over at Brooklyn Law School for her take. She explained that the probe could take months, and that the QB won’t have access to many legal tools since this isn’t a criminal probe.

She explained that the “infamous” Article 46 under the NFL’s collective bargaining agreement is the guiding factor here. It provides “the slenderest of due process,” said Balsam, who used to work for the League as Counsel for Operations and Litigation.

The NFL, or whomever they delegate to handle this, would interview the alleged victim and Uber for evidence. This isn’t like a district attorney’s office is running the probe, however. The League lacks subpoena power. That means Kate and the company need to voluntarily provide information.

When that’s all done, the NFL would likely make their decision at the time least distracting to the players and teams, Balsam said. So that means it would probably happen in an off-season.

Assuming that the investigation finds Winston guilty, and the Commissioner (Goddell at the time of this writing) disciplines Winston, then the QB has 10 days to appeal.

Balsam said he wouldn’t be able to confront his witnesses, and won’t have access to files used in the investigation. (Basically, he’ll lack access to some tools that defendants take for granted in criminal trials.) And he probably won’t succeed if he and his lawyers attempt to prove that Article 46 is somehow illegal.

Balsam pointed out that courts in the 2nd and 8th Circuit have upheld it in prior litigation. Judges ruled that this is what the players negotiated for as equal participants in a fair bargaining process.

If players want to get rid of Article 46, it will have to happen the next time they negotiate their bargaining agreement, Balsam said. She suggested that’s unlikely since the League would only give up Article 46 in return for something else. The majority of the players (who stay out of real and alleged trouble) wouldn’t want to give up anything.

“So why is the NFLPA persisting?” she asked rhetorically. Balsam suggested that the union is trying to get leverage by embarrassing the league through constant lawsuits. The money spent on these complaints would, hypothetically save cash down the line.