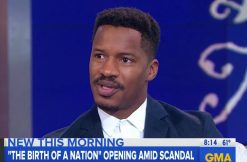 Nate Parker doesn’t want to talk about the rape allegation. Not anymore.

The Birth of a Nation director spoke with Good Morning America’s Robin Roberts on Monday. Roberts asked him about the 1999 claim that he and his roommate raped an unconscious student while attending Penn State University. The criminal charges, for which Parker was acquitted in 2001, resurfaced in August amid positive buzz for his movie.

Roberts: Do you have any remorse? [Do you] apologize for what happened?

Parker: I was on 60 Minutes last night. We talked about it, you know. Three days out [the film premieres on Friday]. I think the important thing is this isn’t about me. The story of Nat Turner as an American, as an American people, to know the story of a man who was erased from history. At some point, that that’s where our focus should be, especially now. I mean so many things are happening in America, especially the last 72 hours, so the hope is that people care about the real story of America that has been so shifted and pushed aside with revisionist history that I think that this is a film that they should see.

…Yes, but how does he feel about the sexual assault allegation?

Roberts kept trying to veer the conversation back to the rape allegation while Parker very clearly was done with the topic. After some push and pull about the subject, Parker just said point-blank: “And I said it last night, I was falsely accused. I was proven innocent, and I’m not going to apologize for that. I feel terribly about that situation, but at some point, we’ve got to ask ourselves like, what are we—is this a film that is important to us?”

And then he went on about how the movie, which is about the 1831 slave rebellion led by preacher Nat Turner, had important social import to African-Americans like him and Roberts.

Parker has always said he was innocent. The case went to criminal court. Parker was acquitted on four counts. The other student, Jean McGianni Celestin was convicted, but that was overturned in 2005. (FYI, he’s got a co-writing credit on Birth of a Nation.)

The alleged victim committed suicide in 2012. Her brother told Variety that the trial was “tough” for her, and changed her as a person, though writer Ramin Setoodeh said there’s no evidence the trial directly caused it.