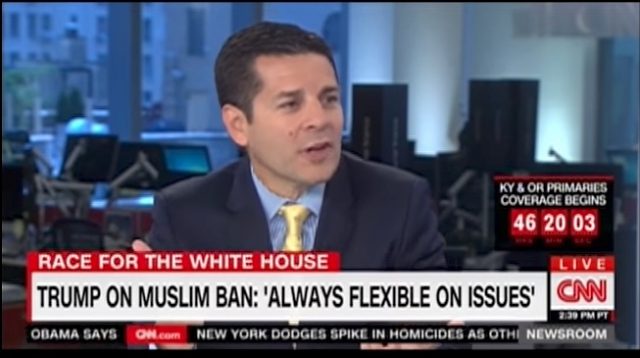 A lawsuit filed in an Ohio federal court accuses the neo-Nazi Daily Stormer website of defaming comedian and talk show host Dean Obeidallah in an article which described him as a “terrorist” among other things.

According to the lawsuit:

“Defendants falsely claim that Plaintiff Dean Obeidallah planned and executed the horrific terrorist attack that took place at an Ariana Grande concert in Manchester, United Kingdom a little over a week earlier…That terrorist attack resulted in 23 deaths and 250 injuries; many of the victims were children.”

The original article, which LawNewz has declined to link to, is entitled: “Dean Obeidallah, Mastermind Behind Manchester Bombing, Calls on Trump to Declare Whites the Real Terrorists.” The article describes Obeidallah, who is Muslim, as a member of ISIS and a “confessed terrorist wanted by Europol, MI-5, Interpol and a litany of other international authorities.” The lawsuit also notes that the article says Obeidallah fled to Syria after encouraging more Manchester-style terrorist attacks.

None of the Daily Stormer‘s allegations against Mr. Obeidallah are true.

Rather, Obeidallah is a New York resident and nationally-known talk show host with his own program on SiriusXM radio–the first Muslim-American to host such a program. He’s also a contributor to CNN and regularly writes articles for outlets such as The Daily Beast. He was apparently targeted by the Daily Stormer for his prominent position as a Muslim media figure.

In the complaint, Obeidallah notes that through his attorneys he attempted to contact the Daily Stormer and its editor-in-chief Andrew Anglin, and asked that the article be removed. As two months passed with no response, the lawsuit was filed.

LawNewz.com asked Mr. Obeidallah about why he might have been targeted in the first place, he wrote:

Andrew Anglin was apparently triggered by my May 31, 2017 Daily Beast article, “Will Donald Trump Ever Say the Words “White Supremacist Terrorism?” In it, I detailed the three incidents of white supremacist terror we had seen since January in the United States that had claimed the lives of four Americans. I urged President Trump to not only denounce white supremacy but call these violent acts what they were: White supremacist terrorism. Mocking white supremacists and their beloved Trump was too much for him. So he literally fabricated tweets saying I was behind the Manchester terrorist bombing in May.

Obeidallah’s last sentence is a reference to a series of fake tweets, copiously documented and reproduced on pages 12-23 of the lawsuit, which the Daily Stormer article used to support its claims of Obeidallah’s purported support for terrorism. In those fake tweets, Anglin–who also authored the article–or someone else doctored seven actual tweets of Obeidallah’s in order to make it appear as if he fled to Syria, praised the Manchester attacks, took credit for them, praised the Manchester terrorist, clamored for hospital deaths and supported additional attacks against Americans.

“The Daily Stormer has published false information and fabricated evidence in its effort to mislead its readers and promote anti-Muslim sentiment. Knowingly publishing false information in order to target and silence those with whom you disagree is unlawful and unacceptable, and publishers like Andrew Anglin need to be held accountable.”

Aside from the defamation claims, the lawsuit claims Obeidallah has been subject to various threats since the original article’s publication. He is seeking damages in excess of $75,000–a standard minimum amount claimed in certain federal lawsuits.