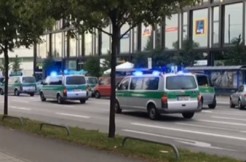 So far, the death toll of Friday’s mass shooting in Munich, Germany has reached nine, according to The Guardian. Police said one person apparently committed suicide, and is being investigated for involvement in the attack.

We are verifying the possibility of one dead person being involved in the shooting, #München, #oez, #Schießerei

The Telegraph reports that at least one gunman opened fire at a McDonalds, and police said they’re looking for possibly three suspects.

This story continues to unfold, and police continue to investigate. Reporting sometimes conflicts. A motive for the attack remains unclear. It may be terrorism. It may be a homegrown anti-immigrant rampage. So much remains unclear.

A witness, who told CNN she was Muslim, said a gunman cried, “Allahu Akbar” (God is Great). Meanwhile, another witness said an attacker used anti-foreigner slurs, according to US News & World Report.
–