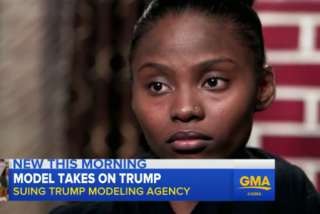 Alexia Palmer, the model that is suing Donald Trump’s modeling agency, Trump Model Management, appeared on Good Morning America Thursday morning, and she didn’t pull any punches.  “I feel like I was a slave or something,” she told GMA about her time working for the agency. Her lawsuit claims that the visa application they filled out for her said she would be paid $75,000 a year for three years, but only got $3,880.75.

In response, Trump’s attorney Alan Garten told GMA that there was no employer/employee relationship between the agency and Palmer. When asked why the agency checked the box on Palmer’s visa application for full-time employee, Garten said “That’s what the form requires.” When pressed about it not being true, Garten simply responded, “This is how it’s done in the industry.” The old  “everyone else is doing it” defense.

Check out both interviews in the video below: