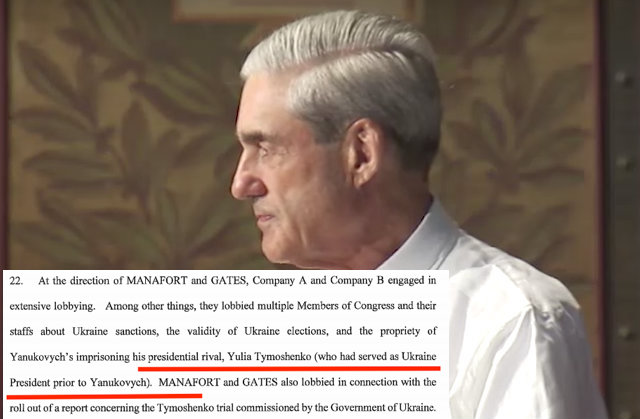 That indictment, signed October 27, 2017, was finally made public this morning. Manafort and Gates surrendered themselves to the FBI soon thereafter. But a cursory glance at the indictment itself should provide their attorneys with at least one point of contention.

Midway through the charging documentation–on page 16 of the 31-page indictment–is a reference to Viktor Yanukovych, the former president of the Ukraine and one of Manafort’s former clients. Manafort is accused of failing to have registered as a lobbyist for Yanukovych in violation of the Foreign Agents Registration Act (“FARA”), amongst other various crimes detailed therein.

Contained within that reference to Yanukovych is a glaring and atypically sophomoric error that could have easily been avoided or remedied with a simple Google search by someone–an intern, maybe–amongst Mueller’s legion of lawyers.

Paragraph 22 of the indictment reads, in part:

At the direction of MANAFORT and GATES, Company A and Company B engaged in extensive lobbying. Among other things, they lobbied multiple Members of Congress and their staffs about Ukraine sanctions, the validity of Ukraine elections, and the propriety of Yanukovych imprisoning his presidential rival, Yulia Tymoshenko (who had served as Ukraine President prior to Yanukovych)… [emphasis added]

Eyes unadorned with basic knowledge of the Ukrainian political system might have missed the problem with that last-quoted-and-emphasized sentence above–and apparently they did.

What might have been confusing the Mueller team–or whoever was unlucky enough to be assigned final typing and editing duties–was Tymoshenko serving as Ukrainian prime minister after Yanukovych served as prime minister–a term of office lasting from December 2007 to March 2010.

The Tymoshenko flub is a massive error of fact, but it doesn’t impinge much–if any–on the narrative contained in the indictment itself. The error doesn’t really bear upon the background facts related to Manafort’s and Gates’ alleged crimes. The error also doesn’t bear whatsoever upon the laws Manafort and Gates are accused of breaking. Rather, it’s an error which bears upon the credibility of the team now seeking to prosecute the men named in the indictment.

Hopes and dreams of the second-coming of Archie Cox will, to a certain extent, rely upon the credibility and legal acumen of the Mueller team. An easily avoidable error like this is, to some at least, likely to look like evidence of the opposite.