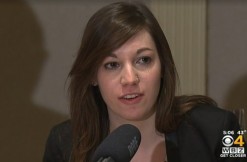 A Harvard alum is suing her alma mater for mishandling her sexual assault and harassment allegations against an ex-boyfriend. In a federal civil complaint filed Tuesday in Massachusetts, Alyssa Leader says the university kept her in the same dorm as her alleged attacker, even after she reported him to campus police. The ex—named “John Doe 1” in the suit—also worked with Leader in the same café during and after their relationship.

In her suit, she reports the university let John Doe 1 participate in graduation ceremonies “despite their policy to not allow respondents in ongoing disciplinary proceedings to participate.” Plus, she says he admitted to the school that he threatened her during sex, and acted violently. Nonetheless, Harvard let him off the hook.

“No one should have to live in fear of their safety,” said Leader, 22, in a Wednesday press conference. “I should not have had to live with my abuser. They should have done something to separate us.”

You can see some footage from the press conference here:

Leader says the abuse started in the middle of their relationship, with John Doe 1 shoving furniture and making threats whenever she turned him down for sex. After she yielded, he’d allegedly keep going with the intercourse even though she was crying.

“It’s almost as if you like when people treat you like s—t,” John Doe 1 is alleged to have said in one threat to Leader. “People treat you poorly and then you give them what they want. Maybe I should start treating you like shit to get what I want.”

After their breakup, Leader’s now-ex kept harassing her, taunting her whenever they passed by each other on campus. He allegedly kept showing up at her shifts at work (even though he was off), and stared at her, or made comments like, “You know, if you have to coerce someone, you’re doing it wrong.”

She’s now suing Harvard for damages, and court costs, among other things. Alexander S. Zalkin, one of her attorneys, told The New York Times that the suit zeroes in on the university, not John Doe 1, because of the “larger issue” of colleges and the handling for reported sexual assaults.

“The more traumatic of the two is the institutional betrayal and lack of response to her reporting,” Zalkin said.

In a letter to The New York Times, the school wrote that it won’t discuss ongoing litigation, but defended its record of handling reports of sexual assaults.

A case like this has can have huge, if indirect implications. Harvard was already investigated (with a total of about 50 other colleges and universities) in 2014 for the reported mishandling of sexual assault allegations under federal law. The feds have already promised to withhold funding from schools that have bad policies.