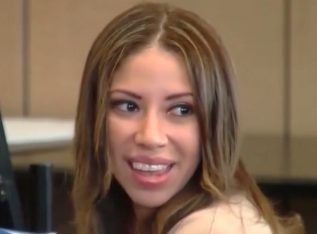 For the second time in five-years, a Florida jury was asked to decide the fate of Dalia Dippolito, who prosecutors charged with solicitation to commit first degree murder for attempting to hire a hitman to kill her then-husband back in 2009.  However, unlike the jury in the first trial back in 2011, this time the jury was unable to reach a unanimous verdict and the judge was forced to declare a mistrial.  The judge announced the jurors were evenly split:  three voted guilty and three voted not guilty.

The murder-for-hire plot was featured on the television show “Cops,” and Dippolito was captured on camera offering $7,000 to an undercover officer posing as a hitman to have her husband killed.

Dippolito was convicted at her first trial in 2011 and sentenced to 20 years in prison for solicitation to commit first-degree murder with a firearm. However, an appeals court overturned her conviction in 2014 and granted her a new trial. She has been out of jail on bond since the first verdict was thrown out.

During the retrial, prosecutors only called a few witnesses and mainly focused on secretly recorded audio and videos of Dippolito speaking to undercover cops and a confidential informant who played an important role in helping police obtain evidence that was used in the case.

In one key video, Dippolito was seen paying the confidential informant — who also happened to be her lover — $1,200 that prosecutors argued was meant as a down payment to help finance the hit.  In another video, Dippolito was recorded allegedly discussing the hit with an undercover cop posing as a hitman.

“This case is based 100 percent on her words, her actions, her intent, all day, every day,” prosecutor Craig Williams told jurors during his closing argument. “She wanted two bullets put in her husband’s head.”

Dippolito’s defense team, led by attorney Brian Claypool, countered the prosecution’s argument by saying the Boynton Beach Police Department violated Dippolito’s rights by setting her up in order to make a big splash for the “Cops” television show production team.

“They tossed Dalia Dippolito under the bus,” Claypool argued in his closing statement. “They made this way more than it ever was, and they could care less about her constitutional rights.”

The defense team also attacked the credibility of the cops who led the sting operation, slamming them for failing to record certain conversations between Dippolito and the confidential informant.  Claypool argued the cops failed to record the conversation on purpose because they knew it would damage a future case against Dippolito.

Part of this strategy included calling a former LAPD cop as an expert witness who opined that the investigation was not conducted properly.

Dippolito did not take the stand to testify in her own defense during the retrial.

After several hours of deliberation on Tuesday, the six-person jury, consisting of four women and two men, notified the judge they were unable to reach a verdict.  The judge decided to send them home for the evening and asked them to resume deliberations at 9:30 a.m. on Wednesday morning.

It appears 1 of 6 jurors is not convinced that Dalia Dippolito is guilty of trying to hire a hitman. Deliberations start at 9:30. @CBS12 pic.twitter.com/VBC7dLrH71

The defense team argued that the news reports suggested a juror had spoken to the media.  In light of these concerns, the judge then questioned each juror individually about whether they had spoken to the media or listened to or read any news accounts of the trial. They all said they had not.  And after learning from the judge of the 3-3 split among the jurors, it would appear as though the news report was ultimately inaccurate.

After hearing additional argument from the defense team and the prosecution as to whether to declare a mistrial, the judge decided to read a formal “Allen Charge” to the jury that effectively asks them to try one more time to reach a unanimous decision.  Over the objections of the defense team, the judge determined his ruling last night to send the jurors home was not a true “Allen Charge” and therefore, it would not be improper for him issue one on Wednesday morning.

The judge also informed jurors there was not another charge other than solicitation to commit first-degree murder that they could consider in their deliberations.

The jurors then returned to the jury room to resume deliberations in light of the judge’s latest instructions. Within an hour, they came back to tell the judge they couldn’t reach a verdict. The judge ordered a mistrial.

As a final matter, the judge set a status conference for January 6 at which time the lawyers will return to court to discuss how the case will be handled going forward.