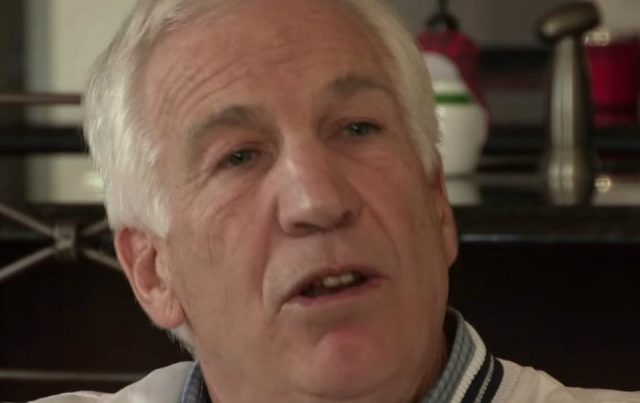 HARRISBURG, Pa. (AP) — Jerry Sandusky lost a bid Wednesday for a new trial and a second chance to convince a jury he is innocent of the child sexual abuse charges that landed him in state prison to serve a lengthy sentence.

Judge John Foradora denied Sandusky’s requests for a new trial or for dismissal of charges.

The former Penn State assistant football coach’s lawyers have 30 days to start an appeal of the judge’s decision to the Superior Court. They did not immediately respond to a request seeking comment.

Sandusky, 73, has consistently maintained he was wrongly convicted. He argued that he did not receive adequate representation at his 2012 trial and that prosecutors should have disclosed more details about changes to victims’ stories.

“Although he was denied access to the victims’ psychological records, Sandusky was permitted to call witnesses to explore whether the victims had undergone repressed memory therapy prior to trial, and he did explore that subject” with victims and other witnesses, Foradora wrote.

Foradora also rejected arguments that Sandusky’s lawyers should not have let him waive a preliminary hearing, should not have allowed him to give a television interview after his arrest, and should have done more to challenge the identity of a young man described as Victim 2 in court records.

The judge said the bulk of Sandusky’s claims lacked merit.

“Those that remain, whether they fail for want of prejudice or because (trial defense attorney Joe) Amendola’s actions or failure to act were informed by a reasonable strategy, do not combine to call into question the overall effectiveness of the defense counsel provided or the legitimacy of the verdict,” Foradora concluded.

Pennsylvania Attorney General Josh Shapiro said prosecutors have “achieved justice” for Sandusky’s victims and are confident the convictions will stand.

“Hopefully, today’s decision will allow the victims of Mr. Sandusky to live their lives knowing that this serial sexual abuser will remain behind bars,” said Shapiro, a Democrat.

Sandusky has been serving a 30- to 60-year sentence. Eight of his accusers testified at trial, describing abuse that ranged from grooming and fondling to violent sexual attacks.

The case, among the biggest scandals in college football history, led to major changes at Penn State and new state laws governing child abuse in Pennsylvania and other states.

Sandusky spent three decades at the university as an assistant to Hall of Fame coach Joe Paterno before retiring in 1999.

The decision follows previous rulings against Sandusky by the state’s Supreme and Superior courts.

Foradora was brought in nearly a year ago after the trial judge, John Cleland, removed himself in response to sharp criticism by Sandusky’s lawyers of a meeting that Cleland participated in before Sandusky waived a preliminary hearing in 2011.

Penn State’s former president, Graham Spanier, and two other ex-administrators, Tim Curley and Gary Schultz, were sentenced to jail time earlier this year after Spanier was found guilty and the others pleaded guilty to child endangerment for their handling of a 2001 complaint about Sandusky showering with a boy. Spanier is free on bail while he appeals his conviction.

The scandal has cost Penn State more than $200 million in fines, settlements and other costs, and the football program was hit with significant NCAA penalties that were later dialed back.