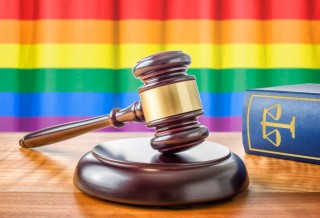 The IRS and the Department of the Treasury proposed rule changes in October 2015, reflecting Supreme Court decisions protecting gay marriage. 2013’s United States v. Windsor said that the federal government could not interpret the terms “spouse” and “marriage” to only refer to heterosexual relationships, and 2015’s Obergefell v. Hodges recognized the right for same-sex couples to marry. On Friday, the changes went into effect.

The amendments, made to Income Tax Regulations, Estate Tax Regulations, Gift Tax Regulations, Generation Skipping Transfer Tax Regulations, Employment Tax and Collection of Income Tax at Source Regulations, and the Regulations on Procedure and Administration, included clarification of terminology to reflect the Court’s decisions. According to Friday’s Federal Register, the terms “spouse,” “husband,” and “wife” now refer to “an individual lawfully married to another individual,” and “husband and wife” refers to “two individuals lawfully married to each other,” regardless of the sex of those individuals. The changes also make clear that the terms “marriage,” “spouse,” “husband,” and “wife” do not refer to relationships such as domestic partnerships, civil unions, or other relationships that may be recognized under state law, but are not classified as marriage.

The rule changes were announced in the Federal Register in October, in accordance with the “notice and comment” requirement before an agency can put new rules into effect. The IRS and Treasury Department received comments, and one person even requested a public hearing. The hearing was held on January 28, and the person who requested it didn’t show, but he did submit comments. No one in attendance at the hearing chose to speak.