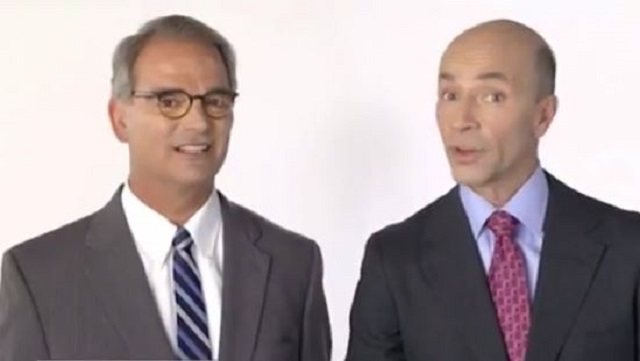 Personal injury attorneys Ross Cellino and Stephen Barnes are as well known in the Northeast for their ubiquitous commercials as their successes in the courtroom. Their firm, Cellino & Barnes, has offices all over the state of New York, with dozens of attorneys working for them, but a recent lawsuit from Cellino against Barnes and the firm itself is looking to break up the band. Oddly enough though, the commercials are still running.

The two attorneys are each 50% shareholders in the firm (they have a second practice in California, in which Barnes is the majority shareholder). With disputes regarding a list of issues detailed in the court filing, Cellino argues the dissolution of the New York firm is the best solution for everyone, according to his lawsuit, filed in New York Supreme Court in May. Court documents were originally kept under seal, but were recently made public.

If you’re not from New York or California, you may not be familiar with their commercials or their smooth, catchy jingle, so here’s a clip for you:

As the case continues to play out, however, so do the commercials. This raises the question of why spend money to advertise something that may cease to exist in the near future. Interestingly enough, “marketing and advertising decisions” was one of the issues that Cellino and Barnes had trouble with, according to court documents. Other areas of contention include hiring practices, attorney compensation, and case assignment.

“On each of these issue, petitioner Cellino and respondent Barnes have taken essentially opposite positions, resulting in a deadlock[.]”

LawNewz.com reached out to both Cellino and Barnes for comment, but neither has responded at this time.