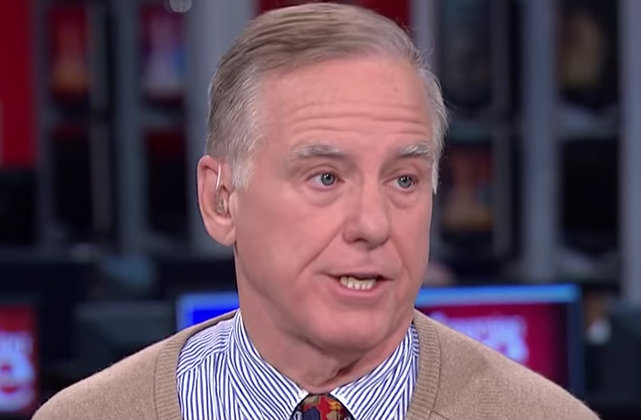 Even after almost two days of experts attempting to explain it, Howard Dean apparently still doesn’t understand how the First Amendment works. In fact, the former Vermont governor cited an irrelevant Supreme Court decision when doubling-downed on his argument that hate speech isn’t protected by the Constitution. First, though, let’s review the timeline of Dean’s mistake. Then let’s see where he went wrong.

This whole thing started Thursday night, when he made this claim.

Hate speech is not protected by the first amendment. https://t.co/DOct3xcLoY

This references something awful Ann Coulter reportedly said in 2002: “My only regret with Timothy McVeigh is he did not go to the New York Times Building.”

Does it meet colloquial definitions of hate speech? No. Is it terrible? Yes. Is it Constitutionally protected? Yuuuuuuuuuup. So is hate speech, sadly. That’s what commentators tried to drill into Dean’s head. Politifact got in on it. So did Vice‘s Sarah Jeong, and others.

One counterargument caught Dean’s attention, however. A Friday op-ed from UCLA law Professor Eugene Volokh. This constitutional scholar and First Amendment expert took pains to explain how Free Speech works. What’s more important, and possibly useful to non-lawyers, is his explanation of “fighting words.” [Emphasis mine]

To be sure, there are some kinds of speech that are unprotected by the First Amendment. But those narrow exceptions have nothing to do with “hate speech” in any conventionally used sense of the term. For instance, there is an exception for “fighting words” — face-to-face personal insults addressed to a specific person, of the sort that are likely to start an immediate fight. But this exception isn’t limited to racial or religious insults, nor does it cover all racially or religiously offensive statements. Indeed, when the City of St. Paul tried to specifically punish bigoted fighting words, the Supreme Court held that this selective prohibition was unconstitutional (R.A.V. v. City of St. Paul (1992)), even though a broad ban on all fighting words would indeed be permissible.

He also pointed out other exceptions, like “true threats of illegal conduct or incitement intended to and likely to produce imminent illegal conduct — i.e., illegal conduct in the next few hours or maybe days, as opposed to some illegal conduct some time in the future.” But the fighting words exception is key here because of how Dean later responded.

For WAPO and others raising issues about hate speech not being constitutionally protected, read “Chaplinsky v New Hampshire SCOTUS 1942

Howard Dean–a former presidential candidate, and long-time power player in Vermont politics–tried to prove that hate speech isn’t protected, but instead cited a Supreme Court case that absolutely has nothing to do with hate speech.

1942’s Chaplinsky v. New Hampshire turned on “fighting words.” In a unanimous ruling, justices upheld the conviction, under state law, of a man who used abusive language to provoke the listener to an act of violence.

2. The Court notices judicially that the appellations “damned racketeer” and “damned Fascist” are epithets likely to provoke the average person to retaliation, and thereby cause a breach of the peace.

Now this is where I may lose some of you. What about racial slurs? Yes, if someone hurls a bunch of insults in such a way as to provoke a fistfight, then it’s outside of the First Amendment’s protection. But it wouldn’t be unprotected because it’s a slur. It’s unprotected because it, specifically, would cause violence soon, if not here and now. Volokh’s explanation must be repeated here: Fighting words are “face-to-face personal insults addressed to a specific person, of the sort that are likely to start an immediate fight.” It has nothing to do with the speech being bigoted. It’s all to do with the immediate incitement to violence.

Volokh wrote a rebuttal essay to Dean’s second tweet on Saturday morning. One line sums it up.

So Chaplinsky doesn’t hold that “Hate speech is not protected by the first amendment.”

And even after all that, here’s the governor’s most recent tweet on the matter.

Why don’t you read the 1942 Chaplinsky decision from Scotus. https://t.co/1nGuRlrAOQ