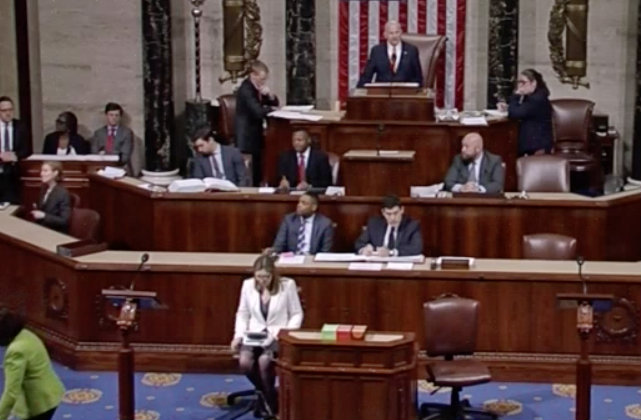 The House has passed the Obamacare repeal bill on Thursday.

The GOP-written American Health Care Act would overwrite and repeal parts of the Affordable Care Act (“Obamacare”). President Donald Trump promised on the campaign trail to repeal and replace Barack Obama‘s signature policy achievement, but initial attempts stalled back in late March. They just didn’t have enough support in the House, despite Republicans commanding a 238 to 193 majority, and it never came to a vote. Most dissent came from members of the “Freedom Caucus,” a group of representatives who push hard-right on fiscal issues. They, as a group, think it didn’t get rid of enough.

Public understanding on the new bill remain scant, and it has been criticized for being rushed to passage. In March, the non-partisan Congressional Budget Office estimated that the AHCA would reduce the deficit, but increase the number of uninsured people 24 million by 2026:

The reductions in insurance coverage between 2018 and 2026 would stem in large part from changes in Medicaid enrollment—because some states would discontinue their expansion of eligibility, some states that would have expanded eligibility in the future would choose not to do so, and per-enrollee spending in the program would be capped.

The CBO has yet to provide analysis on the new AHCA as of Thursday.

This bill’s fate possibly turned on how it handles people with so-called pre-existing conditions. Obamacare mandated that such patients get coverage like everyone else. Before the ACA, these people would otherwise lack health care insurance, face high rates, or get stripped-down policies.

The AHCA includes a waiver for states that want to opt out of covering these kinds of patients. As a compromise, however, the bill included a fund for such high-risk patients in these areas. This caused some fiscal conservatives to balk at supporting it, however, but it ended up being the carrot that turned two moderate Congressmen from “no” votes to “yes.” Michigan’s Fred Upton and Missouri’s Billy Long changed their minds on Tuesday after reportedly cinching an amendment that would add $8 billion to the high-risk fund. This bumps the total amount up to $138 billion, and would affect things like maternity, mental health, and substance abuse issues. The idea is that this would keep premiums down for such “high-risk” patients.

Freedom Caucus members were unlikely to like this since it increases federal costs. Ironically enough, so were ACA supporters. The new bill’s provisions still fall short of Obamacare’s reach, and the available funds may not be enough to do the job.

The AHCA will likely be a major part of Trump’s legacy as President just the ACA was to his predecessor. Obamacare didn’t start as a loving term, after all. Now opponents of the new bill have taken to naming it after who they think is responsible for its flaws. One tag is “Trumpcare” but another one is  “Ryancare,” after embattled House Speaker Paul Ryan.

Now that the AHCA has passed the House, it will go before the Senate.