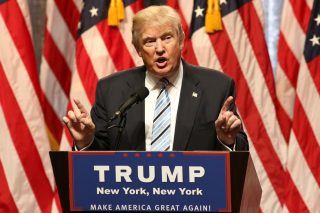 There appears to be growing pressure among many key GOP leaders to replace businessman Donald Trump as their candidate for president, and replace him without some other consensus white knight candidate such as Governor Mike Pence, former governor Mitt Romney, Speaker of the House Rep. Paul Ryan, or someone else the overwhelming majority of party leaders are willing to coalesce behind when things may seem bleak.

Without getting into issues such as whether this is necessary or even a good idea, the effect it might have on millions of Trump loyalists, its long-term impacts on the party, and just how effective (if at all) such a replacement would be in increasing the chances of having a Republican president — or at least of reducing any Republican losses in Congress – let’s at least see what the law might allow.

Actually, there are at least three major plans now being floated to substitute Governor Mike Pence or some other GOP leader for Trump as the GOP’s presidential candidate: (1) using Rule 9, (2) the 25th Amendment, or (3) an updated version of the so-called “faithless elector” under the Electoral College.

But it’s the last of three – the one relying upon the unique characteristics of the Electoral College – that has the greatest chance of being successful, primarily from a legal point of view.

Rule 9 provides in pertinent part that: “The Republican National Committee is hereby authorized and empowered to fill any and all vacancies which may occur by reason of death, declination, or otherwise of the Republican candidate for President . . . as nominated by the national convention.”

But many argue that the rule only empowers the RNC to fill vacancies, not to create new vacancies by removing an already nominated candidate ready and willing to serve if elected.  In other words, the phrase “or otherwise,” read in context, applies to other situations where a candidate neither dies nor abdicates, but otherwise might not be able to stand for election.

This might include a stroke or other sudden medical problem which renders a person unable to serve or even to withdraw, a loss at sea or in the wilderness, etc.  However, it arguably doesn’t include situations where a party deems a nominated candidate no longer fit to represent the party or unelectable, but where the candidate refuses to withdraw.

As election law expert Jim Bopp put it, “It only authorizes the RNC to fill a vacancy if it occurs, i.e., for instance, if [Trump] steps down. . . .  This sentence only empowers the RNC to fill vacancies, not create them.  The power to create a vacancy is a separate and independent power from the power to fill vacancies and that power would have to be conferred on the RNC by a specific rule, which does not exist.”

Even if the RNC had this power, acted under it to replace Trump with a new white knight Republican presidential candidate, and survived the inevitable and complex law suits, there is no guarantee that the early-voting and absentee ballots already cast for Trump, and those which will be cast on ballots which have already been printed and/or cannot now be changed, will be counted for any last minute replacement for Trump, no matter how the replacement was selected.

Although there is some precedent for re-allocating votes cast for a person at election time when a candidate subsequently dies before he can take office, there appears to be no precedent for allocating either electoral votes, or the votes of individual citizen voters, when a political party simply wishes to disavow a person as their candidate.

So, even if Republicans unanimously reputed Trump, and managed to print ballots with another GOP candidate’s name instead of Trump’s, there is no guarantee that ballots already submitted for Trump would automatically be reallocated to the new candidate.  Indeed, it is very likely that they would not, and this would be a major problem since apparently no one foresees Trump winning by such a huge margin that he can give up significant blocks of votes already cast for him.

Although complicated, it contemplates Trump, if elected, immediately relinquishing all the powers of the presidency to Mike Pence under Section Three of the 25th Amendment, and remaining a figurehead president without any real power, with Pence having the legal authority to make all presidential decisions.  Here’s how Prof. Amar described it:

“At the press conference, Trump would solemnly pledge that on Inauguration Day, January 20, he will, only minutes after taking his oath of office, step aside by invoking the presidential disability provisions of Section Three of the Amendment — much as he might step aside if he were undergoing a scheduled coronary bypass that day. He will give notice on Inauguration Day to the president pro tempore of the Senate and the Speaker of the House that he is ‘unable to discharge the powers and duties of his office.

Once Trump does step aside on Inauguration Day, Pence would automatically become acting president of the United States under Section Three, entitled to all the powers of the office until Trump seeks to reassert his rights — which Trump at the press conference must promise he will never do. Trump, however, would technically retain the title of president.”

Interestingly, the method of enforcement is equally complicated and controversial:

“All Pence needs to do post-inauguration, if Trump tries to weasel out, is to declare Trump disabled under another clause of the 25th Amendment — Section Four. So long as the Cabinet and the Congress back Pence in this power play, Pence prevails. The 25th Amendment does not specify all the possible and permissible reasons for declaring someone incapable of discharging his or her duties. It merely states that the Cabinet and Congress must concur that this is the case. And why shouldn’t they concur, given that this deal would have been blessed by voters on Election Day?”

The mere statement of the plan, and its proposed method of enforcement, suggests not only why it is unlikely to be carried out, but also why it would be a very awkward and legally-vulnerable way to operate the U.S. presidency for four years.

That’s why the strongest of the several weak replace-Trump alternatives is to rely upon the unique property of the Electoral College that the actual legal votes for the next president will be cast by electors chosen by the people in each state — not by individual citizen voters.  These votes, although frequently referred to in the media as “electoral votes” in the abstract, are actually real votes to be cast by real people elected to serve as presidential electors by the votes of citizens on Election Day.

Although laws in about 30 states purport to insure that a state’s electors will cast their electoral votes in accordance with the votes of a majority of the state’s citizen voters, these laws have never been enforced, and there is strong reason to believe they are unconstitutional.

For example, a federal judge recently held unconstitutional Virginia’s statute that provides criminal penalties for delegates to party conventions who do not follow the results of the presidential preference primary, saying that the statute “exceeds the powers retained by the Commonwealth of Virginia under the Constitution of the United States and cannot be enforced.”   In other words, Virginia cannot punish delegates to the national convention who may refuse to vote for Trump.

Even if such statutory or other legal restrictions on presidential electors are constitutional, there may be other legal problems – such as standing – in seeking to enforce them if electors can their vote for a newly selected GOP presidential candidate.  Also, most impose only small fines, so virtually all electors will – as a practical matter – be free to vote as they wish. In the past, more than 150 electors have voted for someone other than the person named on the ballots, and in such situations they have been called “faithless electors.”

But if the Republican National Committee and all of the leaders of the Republican Party were to ask all their Republican electors to vote for Pence (or some other compromise Republican candidate) rather than Trump, the electors who did so would not be “faithless” in the way that word has been used in the past.

Instead, they would simply be redirected to vote for a new choice for a Republican president as now re-determined by a clear consensus of the GOP because of events — which occurred after the conventions and arguably could not have been anticipated —  overwhelmingly convinced the party leadership that Trump was not no longer an appropriate candidate.

Under those extreme unanticipated circumstances, enough electors to make the tactic successful might well comply, thereby achieving the goal without the problems posed by the two other proposals.

Although, even this plan could well be seen by many as a “Hail Mary” play called too late in the game.  There are also other troubling possibilities.

For example, suppose the majority of electoral votes are cast for a GOP candidate, but they are split between those cast by electors willing to vote for the new consensus candidate, and those electors who insist upon voting for Trump.

In such a situation, under the 12th Amendment, the House of Representatives then decides the election, with each state’s delegation having only one vote regardless of the delegation’s size.  It would then take an absolute majority of 26 votes for the House to select a president.

As another possibly complicating alternative, it is at least possible that some in Congress might seek to prevent the counting of votes cast by electors who are voting for a candidate other than the person whose name appeared on a ballot cast for them, or even for someone other than a person nominated by a national party convention.

All in all, each of the possible scenarios suggested above seem very unlikely.  But exactly the same was said many months ago about the possible candidacy of the person whose nomination and subsequent actions have precipitated a virtually unprecedented call by many in a major party to repudiate their own presidential candidate.