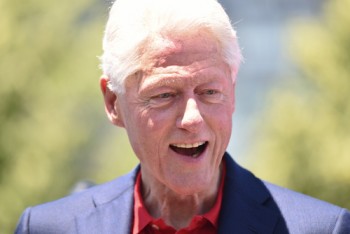 Presumptive Republican presidential nominee Donald Trump has hinted for months that he would make Bill Clinton’s history with women an issue during the presidential campaign.  Just about an hour before the debate, Trump appeared at a press conference with several of Clinton’s accusers.

Whether you are too young to remember the Clinton sex scandals or simply need a refresher course, LawNewz.com has you covered.  Here is a list of Bill Clinton’s alleged and admitted sexual misconduct a over the years as well as his alleged affairs.

Then President Clinton began an affair with the 22-year-old White House intern in 1995.  The two had numerous sexual encounters in the White House, including some in a private office connected to the Oval Office.  Lewinsky’s friend, Linda Tripp, recorded several hours of phone conversations in which Lewinsky went into detail about the affair, including the fact that she kept a blue dress that had Clinton’s DNA on it.

When news of the affair broke in January 1998, Clinton denied the allegations for several months until eventually admitting that he had an inappropriate relationship with Lewinsky in August of 1998.  The affair ultimately led to Clinton’s impeachment in the House of Representatives on charges of perjury and obstruction of justice, making him only the second president to be impeached. Clinton was then acquitted after an impeachment trial in the Senate and remained in office.

In a 1999 interview on Dateline NBC, Broaddrick alleged that Clinton raped her in a motel room during a gubernatorial campaign stop in 1978.

Broaddrick spoke with LawNewz.com on Wednesday and called Hillary Clinton an “enabler” of her husband’s behavior.  Earlier this year, she accused Hillary Clinton of pressuring her to not speak out about the alleged rape back in 1978.

Flowers came forward during the 1992 presidential campaign and said she had been Clinton’s mistress for over a decade.  Immediately after the allegations surfaced, Clinton denied having a relationship with Flowers in an interview on 60 Minutes with Hillary sitting beside him.  In 1998, Clinton admitted to having a sexual relationship with Flowers, but he stated it only occurred once in 1977.

Jones alleged that in 1991 Clinton coaxed her to a hotel room where he made unwanted sexual advances towards her, including dropping his pants and asking her for oral sex.  In 1994, Jones filed a sexual harassment lawsuit against Clinton that in 1998 the Washington Post said “opened a Pandora’s box of allegations about [Clinton’s] past sex life and made him the first sitting president ever interrogated under oath as a defendant in a civil lawsuit or before a grand jury as a criminal target.”  Discovery proceedings in the Jones lawsuit also played a role in under covering the Lewinsky Scandal.

Clinton and Jones reached a settlement in 1998 in which Clinton agreed to pay Jones $850,000 — more than the $700,000 she pled as damages when the lawsuit was filed — but admitted no wrongdoing.  Clinton’s attorney, Robert S. Bennett, maintained the allegations were baseless after the settlement was reached.

In a 1998 interview on 60 Minutes, Willey alleged that Clinton attempted to kiss her and groped her breasts and genitalia during an unwanted encounter in a private room near the Oval Office in 1993.  Willey also alleged Clinton was aroused during the encounter.  Willey was a Democratic Party activist  and met Clinton at a 1989 fundraiser event.

Clinton has always denied the allegation.

Ward-Gracen came forward in 1998 and she regretted having had a one-night stand with Clinton back in 1982.  Speculation had swirled around the alleged affair since at least 1992, but Ward-Gracen had always denied it and avoided getting served with subpoena in the Jones lawsuit by staying out the country to film a television show.

Clinton denied this allegation in 1998.

Perdue-Miller, a former Miss Arkansas, came forward in 1994 and said she had an affair with Clinton while he was governor of Arkansas in 1983.  She said she was warned by an unnamed Democratic Party staffer to stay quiet about the affair during the 1992 campaign.  “They knew that I went jogging by myself and he couldn’t guarantee what would happen to my pretty little legs,” Perdue-Miller told a reporter in a 1998 interview.

Clinton has never publicly responded to this allegation.

Kyle-Browning was a high school friend of Clinton who admitted to having an on-and-off sexual relationship with Clinton from the mid-1970s through 1992.  She made the admission in a sworn affidavit filed in 1998.

Clinton has never publicly responded to this allegation.

The article was first published May 18, 2016. We’ve updated it for this article.