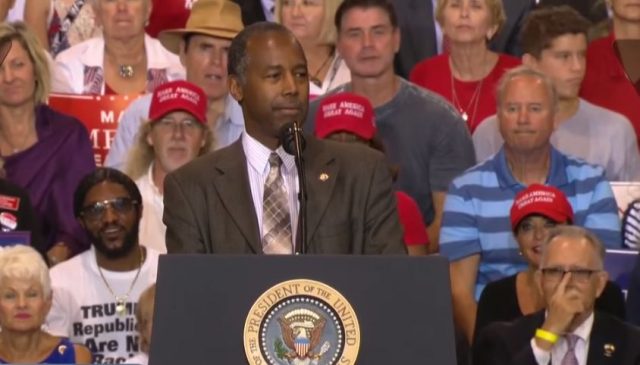 Secretary of Housing and Urban Development Ben Carson appeared at a rally for President Donald Trump on Tuesday, prompting the Campaign Legal Center (CLC) to seek an investigation of whether his presence violated the Hatch Act. The Hatch Act prohibits government officials from using their government positions or titles in endorsing political candidates of a particular party.

In a letter to the Office of Special Counsel (OSC), the CLC noted that Carson was introduced by the event announcer under his official title. “As you know,” the letter said, ” the Hatch Act, 5 U.S.C. § 7324, prohibits the use of a Senate-confirmed Presidential appointee’s official government title at a partisan political campaign event.” The letter acknowledged that a HUD spokesperson claimed that Carson didn’t even hear the announcement, but says it may not matter. Even if Carson didn’t know that he was going to be announced that way, the CLC claims, he still should have taken “reasonable steps to ensure that his official title was not used.”

The CLC said that even if Carson’s presence at the rally doesn’t necessitate discipline, he should still have to go through “remedial Hatch Act training,” take future measures to notify campaign officials not to use his title, and document the steps he takes to do so.

Walter Shaub, senior director of ethics at CLC, andformer director of the Office of Government Ethics (OGE), said, “Misuse of the government’s authority to support a partisan political candidate is an issue that should be taken seriously to deter future violations.” Shaub also said, “Failure to address this misconduct would send the wrong message. We’re in the unusual circumstance of the presidential election cycle having started only months after the last election, which leaves plenty of time for the violations to multiply if there’s no accountability.”

LawNewz.com reached out to OSC, who had no comment on the matter.