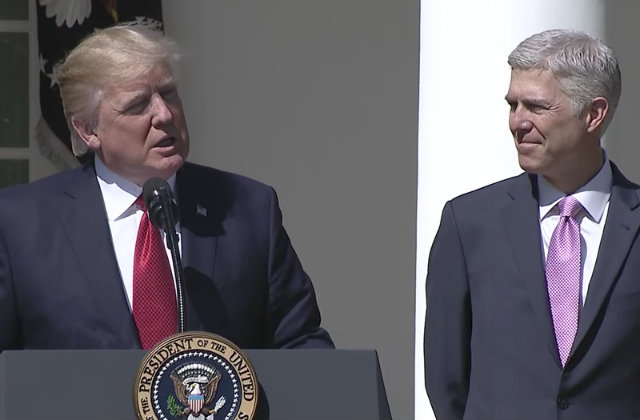 Following recent accusations of a lapse in judicial ethics for apparently campaigning with Republican Senator Mitch McConnell, Supreme Court Justice Neil Gorsuch is being called upon to cancel a planned speech at Trump International Hotel later this week.

In an open letter to Gorsuch penned by the liberal judicial advocacy group Free Speech for Free People and co-signed by a host of other progressive organizations and constitutional lawyers, the Trump-appointed Supreme Court Justice is urged to reconsider his decision to speak at the president’s personally-branded monument to American excess.

The letter cites Canon 1 of the Code of Conduct for United States Judges, which states that a judge should, “maintain and enforce high standards of conduct and should personally observe those standards, so that the integrity and independence of the judiciary may be preserved.” Also cited is Supreme Court precedent itself, which holds that a judge should maintain an interest in “preserving public confidence in the integrity of the judiciary.”

Those points about integrity, independence and public confidence underscore a series of potential ethical conundrums and crises of impartiality related to Gorsuch’s scheduled appearance. Some of those issues include: a codified prohibition against judges engaging in political activity; pending litigation before the Supreme Court involving the president; Gorsuch lending his “Judicial imprimatur” to Trump’s hotel vis-à-vis emoluments issues specifically and presidential profits generally; and the possibility of lending that same imprimatur to Trump’s frequently inflammatory comments. The letter notes:

The letter then goes on to reference the president’s comments about the tragic violence in Charlottesville, which claimed the life of socialist Heather Heyer. During the president’s commentary, he praised a group including neo-Nazis, white supremacists and white nationalists as, “very fine people.” Notably, the violence in Charlottesville was apparently planned by neo-Nazis at the Trump International Hotel where Gorsuch is scheduled to speak.

Ben Clements, Board Chair of Free Speech For People said, in a press release issued along with the open letter:

By lending the prestige of his status and position to the political and financial benefit of Donald Trump, Justice Gorsuch will damage the Court’s integrity, impartiality and legitimacy, and will cast a shadow over any Supreme Court decision in which he participates involving Donald Trump or the Trump Administration.

Gorsuch is scheduled to address The Fund for American Studies’ Defending Freedom Luncheon on September 28. LawNewz reported on this speech when it was initially scheduled and noted, at the time:

The Fund for American Studies (TFAS) is a non-profit dedicated to advancing conservative interests through various academic and fellowship programs and is directly linked to the right-wing State Policy Network group of think tanks and tax-exempt entities, according to The Center for Media and Democracy.