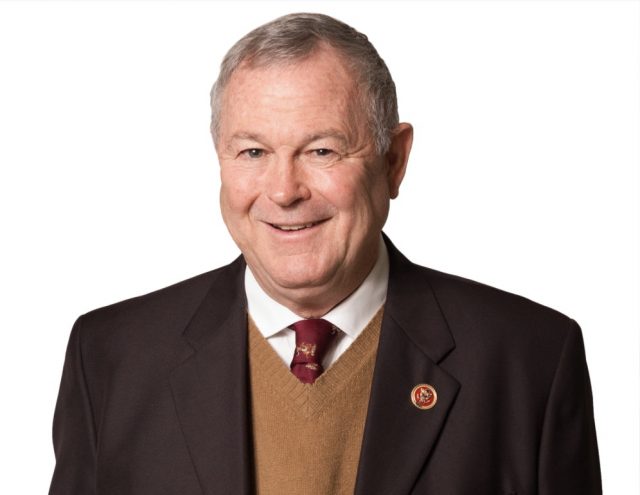 A Republican Congressman from California is alleging his 71-year-old longtime district director was assaulted and knocked unconscious by a group of protesters who descended on his office in D.C. on Tuesday to hand out Valentine’s Day cards.

Congressman Dana Rohrabacher issued a statement that says the incident happened on Tuesday afternoon inside his district office and says his district director, Kathleen Staunton, was knocked unconscious by a group of protesters going by the name Indivisible DC.

Rohrabacher Outraged by Assault on his District Director by ‘Indivisible’ Mob https://t.co/7JtYucqsKT

“I am outraged beyond words that protesters who mobbed my Huntington Beach office violently knocked down my faithful district director, Kathleen Staunton, causing her to be hospitalized. And, yes, deliberate or not, the incident came as part of a mob action that not only intimidates but coerces. Though the protesters think of themselves as idealists, they engaged in political thuggery, pure and simple,” Rohrabacher said  in a statement obtained by LawNewz.

He went on to say this was not the first time the group had disrupted events at his office and said they are organized as “part of a nationwide, anti-Trump mobilization.”

According to the Congressman’s office, Staunton was attempting to exit the district office to use the restroom in the hallway of the office building when a protester “yanked the door open, causing her to fall and hit her head.”  He further alleges a two year-old child was also roughed up in the protests, but was not seriously injured or hospitalized.  Staunton, however, was not so lucky and had to be taken to a local hospital for treatment.

Police were reportedly called to the scene, but they told local news outlets that no arrests were made.

A twitter page for a group under the name Indivisible OC posted pictures yesterday apparently confirming they were at the office, but they deny any assault took place.

The group told the OC Register newspaper that they were simply handing out “Valentine’s Day cards” to the Congressman and they did not believe anyone attempted to hurt anyone else on purpose.

“I don’t think anybody from either side was trying to hurt anybody,” a woman who was in the office at the time of the incident reportedly told the newspaper.

Although, that report did seem to confirm the Congressman’s claim that a door being forcefully pulled open by a male activist is what led to Stanton’s injuries.

“At least one of the activists then began tugging at the door while the woman on the other side, district director Kathleen Staunton, tried to close it,” the article states.  “A male activist then grabbed the door and forcefully pulled it open. That caused Staunton, who was pulling from the other side, to fall.”

However, police did reportedly confirm again late on Tuesday that no arrests had been made in connection with the incident.