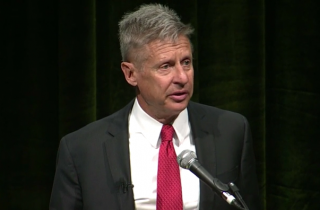 Front-runner Gary Johnson, the party’s nominee in 2012, had only 49.5 percent of the votes in the first ballot of voting at Sunday’s convention in Orlando, Florida. The closest competition came from Austin Petersen, who had 21 percent, and antivirus guru John McAfee, who had 14 percent. Johnson won the nomination after receiving 55 percent in the second round of voting.

Johnson had caused controversy within the party by selecting Bill Weld as his running mate. Weld, the former Governor of Massachusetts, had up until recently been a Republican. Libertarians nominate Vice Presidential nominees separately from their running mates, and Johnson encouraged voters to select Weld in his acceptance speech. He said Weld would be the best candidate to appeal to a national audience in the general election. Johnson received nearly one percent of the votes in the 2012 election, and is marketing himself as a candidate for the #NeverTrump crowd.

The Libertarian convention had still not selected a Vice Presidential candidate at the time of this writing.