Hillary Clinton’s Emails Now Might Finally Take Her Down 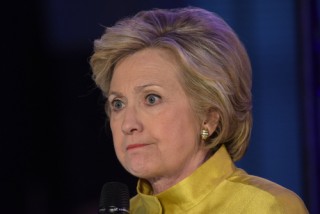 This past week has been a milestone of sorts for those who closely follow the continuing saga of Hillary Clinton’s wrongful use of email systems during her tenure as Secretary of State.  But the kind of milestone it was depends on where you stood when the week began.

For those of us who recognized from the outset that Ms. Clinton’s exclusive use of a personal email system for all her official business (not to mention her unprecedented use of a private server atop that) was a clear violation of the Federal Records Act (“FRA”), the findings of the State Department’s Inspector General (“IG”) to that effect in his May 25 report were no surprise.  In fact, on the admitted facts of the case, no other conclusion was possible, and it was simply another “shoe waiting to be dropped.”

To us, knowing that there are no applicable penalties within the FRA (or in the FOIA, for that matter, which Ms. Clinton also blatantly circumvented), the primary significance of the IG report is that it so flatly and persuasively belies nearly every public “defense” that she has uttered on the matter, from her extraordinary news conference at the United Nations on March 10 of last year to even her initial stunned reactions to the IG report itself this past week.

No, her self-serving email set-up was not “allowed” under the State Department’s rules.  No, she was not “permitted” to use a personal email system exclusively as she did.  No, what she did was hardly just a matter of her “personal convenience.”  No, there is no evidence that any State Department attorney (other than perhaps Secretary Clinton herself) ever gave “legal approval” to any part of her special email system.  No, everything she did was not “fully above board” or in compliance with the “letter and spirit of the rules,” far from it.  Yes, she was indeed required by the FRA to maintain all official emails in an official system for proper review, delineation, and retention upon her departure.  Yes, her private server equipment was in fact the subject of multiple attempted intrusion attempts (i.e., hacks), including by foreign nations.  The list goes on and on.  (Note that this does not even include Ms. Clinton’s many serious “misstatements” about her handling of classified or potentially classified information.)

Now, even the general public is left with the unavoidable conclusion that Ms. Clinton either is ignorant of the law (which too many people know is not so) or else feels blithely untethered to reality in a way that necessarily serves her secretive interests regardless of any truth — the technical legal term for which is “pathological lying,” or perhaps merely “psychosis.”  Not a pretty picture for a voter of any stripe at any stage of the electoral process.

So what is a voter to do?  If you’re a supporter of Donald Trump, you rejoice at the IG report, rightfully thinking that no matter what other shoe drops for Ms. Clinton, at least this one heavily resounds in your candidate’s favor and can be used against her quite potently from now on.  (Though you might also want to have your head examined for supporting such a cartoonish candidate in the first place.)

If you’re Bernie Sanders, you view the IG report with a tinge of regret (i.e., for having stretched so far to take the high road on the issue rather than drilling into it as much as the law and facts beckoned) and then embrace it as both a viable wedge with superdelegates and a potential bludgeon to be used more broadly at the Democratic National Convention.  Yes, it could conceivably be just enough to make the difference for you and your ardent supporters.

If you’re a do-or-die Clinton supporter on the other hand, you look at the IG report as a damning blow to your candidate, as you must, but you console yourself with the fact that it is in effect a “civil law indictment” of her, not a criminal law one.  After all, only the Department of Justice can take that latter step and it is clear to you that Ms. Clinton had no intent to break any criminal law — so she’s still got that going for her, right?

But what if you’re a more mainstream member of the Democratic Party, one who views him- or herself as a “keeper of the flame” and cares above all else about a Democratic victory in November — both nationwide and locally, “up and down the ticket,” so to speak.  You, my friend, are simply scared to death, terrified even, for reasons that are truly unprecedented.

First, you view Mr. Trump as probably the biggest electoral threat to our Nation’s stability ever (with most recent apologies to H. Ross Perot and Ralph Nader, the latter of whose neo-Bolshevism actually did change the outcome in 2000), one who, it has been shrilly opined, “might just nuke Europe.”  Sure, you want to see a Democrat elected to the presidency, every four years if possible, but this year it is especially imperative, vitally so, that the presumptive Republican nominee loses.

Second, you fear Bernie Sanders as your party’s potential standard bearer.  Why?  Well, let’s start with the fact that he’s a 75-year-old (by Election Day) Socialist, the type of candidate who would have seemed inconceivable to you as a presidential one not so long ago.  Is he infinitely more worthy of trust and respect than Ms. Clinton?  Yes, you bet he is.  Does he have enormous appeal?  He sure does, just as candidates such as Howard Dean and (going back to the turbulent ‘60s) Eugene McCarthy did for long stretches of time.  But do you fear that running him as a candidate against Donald Trump might be the rare circumstance that actually could allow the latter to prevail?  Yes, you do, because you should.

More to the point, though, you fear that the most likely Democrat nominee, having just been seriously wounded by this week’s IG report, is manifestly vulnerable to a much greater wound in the form of a criminal indictment for misconduct that far transcends what the IG report dealt with.  Specifically, as a sophisticated observer, you are aware that Former Secretary Clinton’s intent (known in criminal law as mens rea), or lack of same, is not what matters in this case.  Rather, the applicable legal standard is a mere “gross negligence” one, as specified in the standard national security non-disclosure agreement that she signed and its underlying criminal statutes.

And when you marry that to the fact that (among other things) her admitted failure to use the State Department’s special classified email system for classified (or potentially classified) information constituted a clear violation of a criminal prohibition, you start worrying big-time.  And this is especially so given that Ms. Clinton did not just violate such laws inadvertently or even only occasionally — she did so systemically.  In other words, her very email scheme itself appears to have been a walking violation of criminal law, one with the mens rea prosecution standard readily met.

It also is especially so given that the ongoing investigation of Ms. Clinton’s misconduct is being conducted by the FBI, under the leadership of FBI Director James Comey.  Those of us who worked under him when he was the deputy attorney general during the George W. Bush Administration know him to be an exceptional man of utmost integrity, one who can be counted on to recommend a criminal prosecution when the facts and the law of a case warrant it, regardless of political circumstances.  Given that the facts and law are so clear in Ms. Clinton’s case, it is difficult to imagine her not being indicted, unless Jim Comey’s expected recommendation for that is abruptly overruled at “Main Justice” (i.e., by Criminal Division Assistant Attorney General Leslie Caldwell, by Deputy Attorney General Sally Yates, or by Attorney General Loretta Lynch) or at the White House by President Obama (who customarily does not intervene in such things and would do so here either secretly or at no small political peril).

So what you must contemplate, as a leader of the Democratic Party, is the very real possibility of your likely presidential candidate actually being indicted, on criminal charges, sometime between now and, say, (a) the time of the convention at the end of July; (b) the time of the general election in early November; or (c) Inauguration Day in January.  Which possibility would you prefer?

Obviously, the answer might well be possibility (d):  No indictment at all.  But if that were not a realistic possibility, and remembering that your absolute imperative in this election cycle is to avoid at all costs ending up with a President Donald Trump, your preference is clear:  You want a Democrat other than either Clinton or Sanders to go up against Trump in November, unorthodox as that might now sound.

In short, you want a Biden/Kerry ticket, a Kerry/Biden one (less likely), or a ticket with either one of them (preferably Vice President Biden) together with whomever Hillary Clinton picks as her running mate in July.

What?  An already-chosen running mate?  Yes, her running mate, chosen by her as the presidential nominee — because you want Clinton to be replaced as your nominee (i.e., after the convention), but not with Senator Sanders, for all the reasons stated above.

And you get that only one way:  (1) Clinton gets indicted as she ought to, but not until shortly after the convention; (2) the evidence presented  in the indictment (as well as that proffered to her and her attorney privately) overwhelmingly proves to her that she in fact has bigger concerns in the coming months than running for the presidency; (3) Clinton is thereby forced to step down as the nominee (a difficult prospect to conceive of, to be sure); (4) the Democratic Party (translation:  President Obama, as its leader) declares an “unprecedented” emergency and asks everyone to rally around a replacement ticket; and (5) slyest of all, the Democratic Party asks Senator Sanders to please not fight this, which he could not so easily do anyway once his “clout” is dissipated upon the convention’s conclusion.  (Do you remember the seemingly “odd” statements from both Jim Comey and Attorney General Lynch that their ongoing investigation would not necessarily be concluded by the time the convention is held?  Not at all inconsistent with the above, are they?)

And as for putative nominee Hillary Clinton in this fanciful scenario, she would receive an absolutely irresistible benefit in exchange for her totally shocking agreement to withdraw:  Either minimal prosecution, if at all (see, for example, what was done with a “nolo” plea in the case of then-Vice President Spiro T. Agnew in October 1973), or a presidential pardon, or both.  Yes, it could happen, all because Ms. Clinton was unable to envision ever being held to account for her hubris-driven email chicanery.  Just as no one could ever envision a possible scenario like this.

Dan Metcalfe is a registered Democrat who has long said that he will vote for Hillary Clinton in November “if she escapes indictment and manages to become the Democratic presidential nominee.”  He served as Director of the Justice Department’s Office of Information and Privacy for more than 25 years, during which time he handled information-disclosure policy issues on the dozens of Clinton Administration scandals that arose within public view, as well as two that did not.  Since retiring in 2007, he has taught secrecy law at American University’s Washington College of Law.