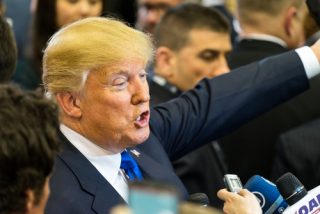 We are now just barely a month away from Donald Trump being sworn in as the 45th President of the United States.  With that in mind, there is a fever pitch of momentum on social media, and among many Democrats (and moderates alike) to do anything possible to prevent Trump from heading to the White House. While the reality is that Trump will almost certainly be taking the oath of office on January 20th, 2017, here at LawNewz.com, we love to use our legal skills to go through the “what-if” scenarios. For all the dreamers out there, here are several actual legal scenarios that could (but probably won’t) prevent Donald Trump from becoming President.

The first scenario is the easiest (but still very unlikely.) On Monday, 538 electors are expected to meet across the country to cast their vote for president. Right now, there are 306 Republicans and 232 Democrat. Trump will obviously win if everyone follows the rules. However, if at least 37 GOP electors break from their respective state’s popular vote and opt for another candidate, they could upend the results.

The National Archives takes us through the process of what happens next:

Harvard Law Professor and Constitutional Law expert Lawrence Lessig told LawNewz.com on Friday that he knows of “at least 30” electors who are thinking of voting their conscience (i.e. not voting for Donald Trump.) So, say there are 37 GOP deflectors that all decided to vote for John Kasich. Once the vote went to the House of Representatives, they would decide between Trump, Clinton and Kasich. In that scenario, a Republican would surely win because there are more “red” states.  Then the pressure would be on to flip states against Donald Trump if there was an alternative GOP candidate.

Of course, there is also the problem that many states have laws on the books that punish Electors who are faithless. However, some Constitutional experts believe these laws would not stand up in court.  The Constitution, experts like Lessig argue, allows electors to vote their conscience in scenarios where the person elected to be President is unfit. Either way, if this happened? Big legal mess!

So here’s the most far fetched one. The 12th Amendment sets the term limits for Presidents. However, if President Obama (or Congress) declares “martial law” and effectively suspends the Constitution, Obama could, at least temporarily stay in office. There is a lot of debate if the President even has the legal authority to do that.  But, if he did, military authority would supersede civilian laws during the period of the “Emergency.” I’m not going to elaborate too much further on this one, suffice it to say it is very very unlikely.

On Wednesday, Rep. Don Beyer (D-Virginia) called for a delay of the Electoral College vote because of the CIA’s reported determination that Russia meddled with the 2016 election to help Donald Trump win. As we analyzed last week, a delay would be very,very difficult, and literally take an Act of Congress. However, it is not impossible.

There is no date mentioned in the Constitution for when the Electoral College must meet. Instead, the date was set by congressional statute 3 U.S.C. 7 which states:

The electors of President and Vice President of each State shall meet and give their votes on the first Monday after the second Wednesday in December next following their appointment at such place in each State as the legislature of such State shall direct.

The law setting the date was passed in 1948, and there has never been a presidential election in which the vote was postponed, according to our research. The U.S. Constitution requires that the electors in each state meet on the same day. So, in order to change the date, Congress would literally have to intervene and pass a law, which would then have to be signed by President Barack Obama. Even if that did happen, it is still likely the new date would be set before Inauguration Day.

Don’t hold your breathe on this one either, especially because Trump comes into office with both a GOP controlled House and Senate, but there is always the possibility that he could be impeached once he takes over.

Article II of the Constitution states  “The President, Vice President, and all civil Officers of the United States shall be removed from Office on Impeachment for, and conviction of, Treason, Bribery, or other High Crimes and Misdemeanors.” The U.S. House of Representatives can impeach, while the Senate must try all impeachments. Two thirds of Senators must vote for a conviction. While most legal experts believe that impeachment is solely reserved for crimes while someone is in office, there is some room for legal debate.

The case involved the 2010 impeachment and conviction of District Court for the Eastern District of Louisiana Judge Thomas Porteous. Porteous was removed from the bench after Congress concluded that he had been involved in corruption, committed perjury, accepted bribes from lawyers practicing in his court, and attempted to conceal his sordid past during the confirmation process. During those impeachment proceedings, the timing of Porteous’ wrongdoing never surfaced as any true obstacle.

Let’s say that President Obama does agree to de-classify intelligence briefings, and we figure out that Trump did, in fact, intervene and encourage Vladimir Putin to interfere with the U.S. election. You can bet many will argue that this is grounds to begin an impeachment proceeding, despite the fact the alleged conduct happened before he took office.

So there you go. These are the four pretty crazy, unlikely scenarios that we could come up with. If you can think of another “legal” scenario, then please leave a comment or email us a tip.