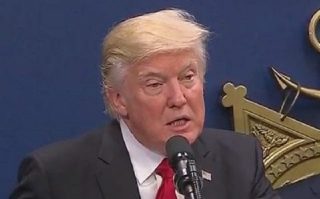 In one of the most ruthless opinions issued of fellow panel judges, five judges from across the political spectrum in the Ninth Circuit went out of their way to issue an opinion about a dismissed appeal, to remind everybody just how embarrassingly bad the prior Ninth Circuit stay panel decision was on Trump’s travel ban. The five judges included the famed, and most respected intellectual amongst the Ninth Circuit, Alex Kozinski. The others included Jay Bybee, Consuelo Callahan, Carlos Bea and Sandra Ikuta.  Nobody other than the original panel came to the defense of the original panel decision, a less than promising start for future approvals of district court interference in Presidential immigration policy.

The language of the opinion was almost Scalian: the five Ninth Circuit judges noted their “obligation to correct” the “manifest” errors so bad that the “fundamental” errors “confound Supreme Court and Ninth Circuit precedent.” The district court questioned any judge issuing a “nationwide TRO” “without making findings of fact or conclusions of law” on the merits of the matter and conducting published opinions on seminal matters of national security based on “oral argument by phone involving four time zones.”

Aside from the procedural defects of the process, the five panel jurists then noted the deep legal problems with the panel’s order: its a-historicity, it’s abdication of precedent, and its usurpation of Constitutionally delegated Presidential rights. Mirroring much of the Boston judge’s decision, the five judges then detail and outline what other critics, skeptics and commentators have noted of the prior panel decision, including critical commentary from liberal law professors and scribes Jonathan Turley, Alan Dershowitz, and Jeffrey Toobin. The original 3-judge panel “neglected or overlooked critical cases by the Supreme Court and by our making clear that when we are reviewing decisions about who may be admitted into the United States, we must defer to the judgment of the political branches.” Of particular note, the five panel judges note how the 3-judge panel decision in “compounding its omission” of Supreme Court decisions and relevant sister Circuit precedents, also “missed all of our own cases” on the subject. The 5 judges conclude the panel engaged in a “clear misstatement of law” so bad it compelled “vacating” an opinion usually mooted by a dismissed case.

The five judges note some of the absurdities in the original 3-judge panel decision: claiming a consular officer must be deferred to more than the President of the United States; claiming first amendment rights exist for foreigners when the Supreme Court twice ruled otherwise; the claim that people here could claim a constitutional right for someone else to travel here, a decision specifically rejected by the Supreme Court just a year ago; and analogous Trumpian kind of immigration exclusion was uniformly approved by Circuit courts across the country in decisions issued between 2003 and 2008. As the five panelists conclude, the overwhelming precedent and legal history reveals a court simply cannot “apply ordinary constitutional standards to immigration policy.”

Unsatisfied with that harsh condemnation, the five judges go even further. The judges concur with the Boston judge’s understanding of “rational basis” review, and condemn the Seattle judge’s and the 3-judge panel’s misapplication and elemental misunderstanding of what “rational basis” is. As the 5 judges note, “so long as there is one facially legitimate and bona fide reason for the President’s actions, our inquiry is at an end.” The issue is whether a reason is given, not whether a judge likes or agree with that reason. That means the executive order sufficed, and no further consideration of the reasons for Trump’s order were allowed.

The five judges still weren’t finished. Next up, the ludicrous suggestion the President had to produce classified and national security information to explain and explicate publicly all the empirical reasons he felt the order needed for safety rationales. As the five judges panel note, judges are not New York Times editors here to substitute for the President at their unelected will. A gavel is not a gun; a judge is not the commander in chief. And, again the 5 panel judges noted the Supreme Court specifically condemned just this kind of demand from judges — demanding classified information to second guess executively privileged decisions. As the court concluded, “the President does not have to come forward with supporting documentation to explain the basis for the Executive Order.”

The panel wraps up its ruthless condemnation of its fellow 3-panel decision by noting their errors are “many and obvious,” including the failure to even “apply the proper standard” of review. As the five judges wisely note: “we are judges, not Platonic guardians,” and the great losers of the 3-panel decision are those that believe elections matter and the rule of law deserves respect, as both were sacrificed for results-oriented judges who ignored the law and evaded the historical precedent to try to reverse the policy outcome of the recent election.