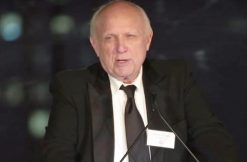 During a dinner hosted by the Media Law Resource Center, he said that President-elect Donald Trump “may be the greatest threat to the First Amendment since the passage of the Sedition Act of 1798.” That’s a bold statement since the Federalist Party used the Alien and Sedition Acts to essentially outlaw criticism of President John Adams. So what should reporters think of doing? They should think of suing our next head of state, he said.

We reached out to Abrams, winning lawyer in the famous Pentagon Papers Supreme Court case and arguably the best known First Amendment attorney in the country (and father of Law Newz.com founder Dan Abrams.) He spoke to us in a Friday interview:

“It’s seems to be that in light of the attacks made by then-Candidate Trump against the press on a continuing basis—his preventing certain journalists from even attending his rallies as part of the press corps because he disapproved for their writing, and his public comments about wanting to loosen American libel law—the press ought to be thinking broadly about how to defend itself if his Administration turns out to be as antagonistic to the press as may be the case.”

Abrams explained that “We do have libel law.” So when someone, even a president, makes a defamatory, false statement against a journalist, there may be a libel claim. He said the press should think up new ways to protect itself from a Trump Administration’s potential repression. He also mentioned this in light of the fact that the press is weaker and more publicly disdained than in recent decades.

“It may well be necessary to think outside the box in response to a deliberately repressive Administration,” he said. “It’s because the level of hostility to the press, and perhaps the willingness to limit or punish press criticism may reach a new height in this Administration.”

He explained that American journalists don’t usually sue for defamation, unlike their peers in places like England. But maybe that should change.

“The press is used to defending libel cases,” he said. “That’s a good part to what I’ve done in my career. So as to protect free speech and free expression as much as possible. I’m not seeking to move away from that. My plea is to bear in mind that one of the potential weapons is that when anyone—president or shoemaker—defames an entity, and speaks falsely and maliciously, one of the possible responses is to bring a libel suit.”

President-elect Trump has long clashed with multiple news outlets. During the campaign season, he claimed certain reporters were actively working against him, and has, in fact, pushed for looser defamation laws so it would be easier for people to sue the press.

Such criticism has continued post-election. This is his Friday response to a protest-turned-riot in Portland, Oregon.

Just had a very open and successful presidential election. Now professional protesters, incited by the media, are protesting. Very unfair!

[Screengrab via Foundation for Individual Rights in Education (The FIRE)]