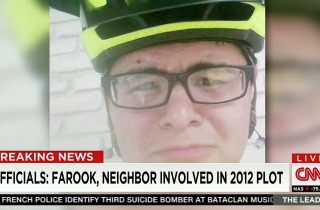 In a new court document filed on Tuesday, federal prosecutors have publicly acknowledged for the first time that a close friend and neighbor of San Bernardino terrorist Syed Rizwan Farook had connections to another Southern California terror cell.

The admission was included in a civil forfeiture application that seeks to allow the United States government to seize the proceeds of two insurance policies purchased by Farook before he committed the December 2, 2015 terror attacks.  The application alleges that the proceeds of the policies (worth $275,000) are subject to forfeiture as assets derived from a crime of terrorism against the United States.

In the application, federal prosecutors go into great detail about Farook’s actions in the years leading up to the attacks, including his association with friend and neighbor Enrique Marquez, Jr. Authorities arrested Marquez Jr. shortly after the December 2, 2015 shooting on charges related to plotting to commit other terror attacks with Farook back in 2011 and 2012 that were ultimately aborted.  A rifle and bomb making materials Marquez is alleged to have purchased in preparation for the aborted 2011 and 2012 attacks were later used by Farook in the 2015 attacks.  Authorities do not believe Marquez had prior knowledge of the 2015 attacks and he claims to have distanced himself from Farook after 2012.

When the details of the aborted plots became public after Marquez’s arrest, many took note of the fact that the two aborted their 2012 plot around the same time that four members of another Southern California terror cell known as the “Island Empire Cell” were arrested.  Earlier this year, Fox News reported on the possible connection between the two groups, but federal investigators always maintained that there was no evidence linking the two groups.

Now, nearly six-months later, federal investigators are finally admitting there was a connection between the “Island Empire Cell” and Marquez back in 2012 when he was plotting with Farook.  The Washington Post first reported on this new admission on Wednesday, finding it buried deep in the civil forfeiture application.

The court filing states that during the time Marquez and Farook plotted the 2011-2012 attacks, “Marquez had ties to a group of jihadists (“California jihadists”) who were arrested in 2012 when they attempted to travel to Afghanistan to join Al Qa’ida.”

The “California jihadists” mentioned in the application and the “Island Empire Cell” are one and the same.  In February 2015, the final two members of the Inland Empire Cell were sentenced to 25-years in prison for plotting to travel overseas to kill American military personnel in Afghanistan.

The court filing does not go into further detail about Marquez’s connection to the other group, nor does it say what caused federal investigators to change their assessment about the connections between the groups.  However, the mere fact that investigators are now admitting there was a connection is significant, and it raises the possibility that Farook and his wife may have also had additional support and connections related to the 2015 attack.