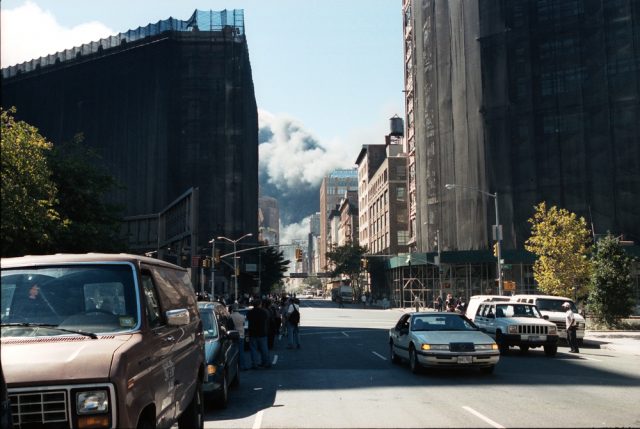 According to new evidence introduced in a lawsuit against the Kingdom of Saudi Arabia, two employees of the Saudi embassy in Washington, D.C. were involved in a “dry run” for the hijackings that ultimately killed 2,996 people and wounded at least 6,000 more on September 11, 2001.

Saudi Arabia knew from at least the early 1990s that al Qaeda had begun to pursue and carry out terrorist attacks against the United States, and used Wahhabism [the Kingdom of Saudi Arabi’s official state religion] to justify its campaign of anti-American violence, but Saudi Arabia’s charitable organizations and Saudi Arabia’s officials, employees and agents continued to provide material support and resources for al Qaeda through and including September 11, 2001.

The lawsuit goes on:

The planning for the September 11th Attacks began in 1996 with initial discussions among al Qaeda members of the feasibility of hijacking planes and crashing them into landmarks in the United States and Osama Bin Laden’s suggestion that large passenger aircraft be used as the mode of attack; between 1997 and 1999, al Qaeda reconnaissance teams travelled to the U.S. to look at potential targets; in November 1999, a “dry run” was conducted on a U.S. passenger flight to test cockpit security; during 1999 and 2000, the hijackers were recruited by al Qaeda, mainly in Saudi Arabia, and then indoctrinated and trained at various terrorist camps in Afghanistan; in January 2000, the first two hijackers arrived in the United States, and in 2000 and 2001 additional hijackers came to the United States, received flight training and made their final preparations, and then assembled in September 2001 to conduct the attacks.

Relying on thousands of pages of FBI documents, the amended court filing notes that two Saudi Arabian students–Mohammed al-Qudhaeein and Hamdan al-Shalawi–were present in the United States two years before the 9/11 attacks and, as noted above, during a 1999 flight from Phoenix to Washington, tried multiple times to access the plane’s cabin and cockpit in order to test the flight-deck security of domestic airliners in the U.S.

When the plane was in flight, al-Qudhaeein asked where the bathroom was; one of the flight attendants pointed him to the back of the plane. Nevertheless, al-Qudhaeein went to the front of the plane and attempted on two occasions to enter the cockpit.

Such behavior scared the pilots of that Washington-bound flight and the plane was forced to make an emergency landing in Ohio. Al-Qudhaeein and al-Shalawi were then handcuffed and taken into custody by local police. The FBI, however, declined to pursue the case.

Other documents cited by the lawsuit note that the two men had trained at al-Qaeda camps in Afghanistan at the same time as some of the 9/11 hijackers (most of whom–15 out of 19–were also Saudi Arabian) and that both had regularly been in contact with one of the hijacker pilots who is now imprisoned at Guantanamo Bay.

The filings also note that both men were longtime employees of the Saudi government, receiving funds and keeping lines of communication open with Saudi officials during their time in the United States. According to the complaint, al-Qudhaeein and al-Shalawi were not simply students, but part of “the Kingdom’s network of agents in the US.”

The recently filed court papers also show that the two alleged Saudi agents had attended a symposium co-sponsored by the Institute for Islamic and Arabic Sciences in America (IASA) and the official Saudi Arabian embassy in D.C.–which was chaired by the Saudi ambassador. This is noteworthy because IASA was eventually closed for being a terrorist front organization and at one point employed Anwar al-Awlaki, the former cleric and editor of al-Qaeda’s official magazine. Al-Awlaki was later assassinated by a drone strike.

Sean Carter, lead attorney for the plaintiffs in the case, In Re: Terrorist Attacks on September 11, 2001, said:

We’ve long asserted that there were longstanding and close relationships between al Qaeda and the religious components of the Saudi government. This is further evidence of that.

The Saudi Arabia, for their part, has tried to kill all of the lawsuits that seek redress for their role in the 9/11 attacks. The litigation was originally filed in 2002 and has been delayed numerous times since then.

Recent legislation, however, known as the Justice Against Sponsors of Terrorism Act, was passed against former President Barack Obama‘s veto in late 2016. The practical import of this legislation is widely believed to allow the multiple lawsuits against Saudi Arabia to move forward.

How those lawsuits ultimately turn out is anyone’s guess, but if these latest filings are any indication, Saudi Arabia could be in for the court fight of its life. The next mandated court filing is scheduled to take place in November.