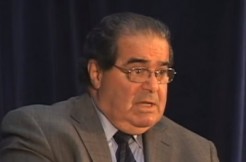 The university that plans to rename its law school after Antonin Scalia is facing some inside resistance. On Wednesday, the faculty senate at George Mason University passed a resolution questioning whether they should be using the late Supreme Court justice’s name because of his reputation.

The resolution said Scalia made “numerous public offensive comments” about LGBTQ people, people of color, and women; and said he was a polarizing figure to the detriment of the country, running “counter to the values of a university that celebrates civil discourse.” The faculty also voiced concern that using his name would rebrand George Mason as a conservative school, rather than as “an unaligned body.”

They also had a bit to say about the grant money tied into the name change. The resolution states school administrators didn’t “disclose the terms” of the donation, which mandates it be used to hire 12 new teachers, as well as some other staff.

The Charles Koch Foundation and an anonymous conservative donated the $30 million, The New York Times reports, and the school announced the name change last month.

Right-wingers have had a hand in George Mason funding for a while. Koch has been a long-time donor to the school’s Law and Economics center, but it’s the recent gift that grabbed national attention.

“Many of us have been watching this happening for a long time,” Bethany Latiecq, professor of human development and family science, told The Times. “But this just renews interest in the bigger picture, which is the Kochs’ influence in higher education and the decreasing influence of the faculty over decision making.”

“You need to really cut to the chase and ask: Is the naming of the Scalia Law School a signal to students that you have to have a particular viewpoint to attend,” David K. Rehr, the law school’s senior associate dean, told The Times. “I think emphatically and overwhelmingly the answer is no.”

The State Council of Higher Education for Virginia is currently reviewing the name change proposal. If approved, George Mason University School of Law will become The Antonin Scalia Law School.

Opponents want to stop that, though. Professors told The Times that next week, the faculty senate will review a resolution to delay the name change.

Nominated by Republican President Ronald Reagan, Antonin Scalia served as an Associate Justice of the U.S. Supreme Court from 1986 until his death in February.

[screengrab via University of California Television]
–