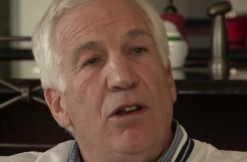 Yesterday, for the first time, Jerry Sandusky, probably the most hated man in America, testified under oath and declared his innocence of the charges for which he was famously convicted and given a virtual life sentence. He did so during a hearing for his post-conviction relief application, which is being heard by the very same judge who oversaw his original criminal trial.

Because there are no cameras allowed in Pennsylvania court rooms, I have decided to use this occasion to release two different phone interviews I did with Sandusky from his maximum security prison back in 2013. I think you will find that these tapes, which have never been heard publicly, shed important light on the entire Penn State “scandal,” which I strongly believe has been grossly misunderstood by the pubic, due largely to massive malpractice in the news media.

Before I get to the thirty minutes of new audiotape, I need to provide some context regarding what happened in court yesterday and my role in the case (which I have written about here before).

While Sandusky did strongly declare his innocence in his testimony (and urged observers to finally look at the “other side” of the story), this part of his appeal has remarkably little to do with his guilt or innocence. It has mostly to do with whether his attorneys at trial were so incompetent as to warrant a new trial. There are several key issues which were raised within this realm.

First, is the issue of whether Sandusky was properly advised regarding the decision to have him not testify at trial. For a lot of people, including myself, not taking the stand in your own defense, especially in a case like this one, is effectively, in the real world, a guilty plea. However, like almost everything about this case, the reality is far more complex than it would appear on the surface.

The reason Sandusky’s attorney Joe Amendola (a guy who I have dealt with extensively in my researching of the Penn State “scandal” and I like, but who I believe was simply totally overwhelmed by the extraordinary circumstances of the case) advised him not to testify was that Sandusky’s adopted son, Matt Sandusky, had suddenly become an accuser in the middle of the trial. This was a complete shock to the defense because Matt had been perhaps Sandusky’s strongest defender, even testifying on his behalf during the grand jury process.

Amendola worried that if Jerry Sandusky testified that the prosecution would be allowed to call Matt Sandusky as a rebuttal witness and that it would be so devastating to the defense that it was not worth risking Jerry taking the stand. On the surface, this would seem to indicate that Sandusky must be guilty because why else would the defense be so fearful of Matt testifying?

However, Amendola, who to this day is virtually certain of Sandusky’s innocence, was not thinking about the decision not to testify in that way. His anxiety was based in the fact that on the first day of the trial Matt Sandusky had been seated next to Jerry’s wife Dottie in the family section of the courtroom and that if he took the stand, and even one juror remembered seeing that, it was game/set/match. Amendola also thought (and, contrary to the very biased media coverage at the time, not without good reason) that the trial, in a normal world, had actually gone pretty well for the defense to that point. He thought it was not worth the risk of putting Jerry, a very poor talker as evidenced by the infamous Bob Costas interview, on the stand and advised him to waive his right to do so.

Jerry, for his part, told me in prison (heard in the audio below) that he regrets not testifying. He said Friday that he did not fully understand, or agree with, the decision for him not to do so. Based on my two prison and two phone interviews with him (three and half hours of which were recorded), I actually believe, under the right circumstances, that he could have made a very compelling witness in his own defense. This is a belief which seems to have been justified by his testimony yesterday.

The second area which got a lot of attention in court yesterday was the previously mentioned interview with Bob Costas. This was the PR disaster which cost Sandusky any semblance of presumption of innocence, though it is extremely important to point out that such a presumption was already gone because Penn State had just fired its legendary head coach Joe Paterno, and Sandusky’s former boss, just before his final home game. In the minds of most people, especially the news media, Penn State would never have done that unless they “knew” that Sandusky was guilty (which is an understandable assumption, but one which is completely incorrect and is the key to understanding this entire case).

I am pretty sure that I am the only person on the planet to speak directly with Sandusky, Amendola and Costas about this event. Sandusky testified Friday that he was woefully unprepared for the interview and didn’t even realize that he would be asked questions by Costas. I believe that this is true.

What I think happened was this: Amendola, thanks to the media firestorm following the Paterno firing, knew his client was in very big trouble. He also knew (at the time) that he had a highly-credible blockbuster statement from a twenty-four-year old married Marine who had been the kid in the “Mike McQueary” shower episode saying emphatically that no abuse had ever taken place. He told Costas about this statement during his own interview with the legendary sportscaster and I think he sensed that Costas would be fair and that it was time for a “Hail Mary” pass. He called Sandusky up and told him to simply tell Costas he was innocent. Costas, being a pro and realizing the remarkable opportunity before him, kept asking questions as long as Sandusky didn’t hang up. Sandusky, being incredibly naïve and not wanting to be rude, having promised his attorney he would do it and having no fear because he knew he was innocent, just kept talking.

While his answers made absolutely no sense coming from someone who would have to be the criminal mastermind of a four-decade-long cover up, there is no doubt that his hesitation (consistent with the way Sandusky has spoken all his life) to strongly declare he isn’t sexually attracted to young boys, was disastrous. There is no question that the mistake by Amendola to facilitate this ill-fated interview helped end any chance of there being a truly fair trial and Sandusky was convicted less than seven months later without even one continuance.

The last element of testimony from yesterday’s Sandusky hearing with which I am intimately familiar deals with the previously mentioned kid from the episode in which former Penn State assistant Mike McQueary claimed to have seen some sort of sexual assault (though he has never explained what it was exactly and he testified incorrectly to the date, the month and the year of the event when finally asked about it under oath ten years later). Based on my four-year investigation into this case, this “kid” (he was nearly fourteen at the time of the episode) is at the heart of this entire fiasco.

If he was indeed abused, then everyone “charged” at Penn State is indeed “guilty” of at least some wrong doing. If he was not, then I strongly believe that everyone here is innocent and that the avalanche that has followed was triggered by money and not by truth.

At issue in court yesterday was whether Amendola made a “deal” with prosecutors not to call this person to testify because, by the time the trial came around (after Paterno was fired, Penn State made it clear accusers would be paid big money, and the Costas interview made it obvious Sandusky was getting convicted) he had, much to the shock of Amendola, obtained a civil lawyer and become an accuser. There was conflicting testimony over whether any such deal was made thanks to the accuser’s dramatic change of heart (prosecution documents show that their own investigators believed that his new story of abuse had been literally written by his lawyer, Andrew Shubin). Amendola said no, but his since-disbarred co-counsel said that there indeed had been (it should be noted that Amendola’s life and career have been destroyed by his role in this case and that he has no incentive at this point to throw himself further under the bus).

What is not in dispute is that the prosecution dramatically claimed to the jury at trial that the identity of the McQueary accuser (mysteriously, no one testified as the accuser in that situation, despite unprecedented publicity and massive amounts of money on the line) along with another “janitor” episode, were “known only to God.”

The only way this can possibly be true is that if the person claiming to be “Victim 2” somehow knew things on the day Paterno was fired that had not yet been reported about McQueary’s testimony and that somewhere out there is a guy who was sexually abused in the shower by Sandusky and never bothered to come forward once the roof caved in and who also has no problem with this “fake” “Victim 2” prominently taking his three million dollars from Penn State.

In a rational world, this is ludicrous. The prosecution lamely hanging on to this absurd notion is not only illogical, but it also contradicts their entire theory of the case (that accusers never lie for money).

As for Sandusky’s view on all of this, when I interviewed him I did so under the assumption that he was guilty of most, if not all, of the crimes for which he was convicted. My concern at the time was figuring out what the heck really happened at Penn State, because the cover up theory never made any sense at all to me.

I realize that no one wants to believe anything that a convicted child molester has to say, but there is nothing he told me in either of these two fifteen minute phone interviews which has not checked out.

Despite my best efforts to catch him in a lie or even a deception in my hours of interviews with Sandusky, I have not been able to do so (trust me, my life over the last several years would have been much better if I had). The evidence against him is completely based in contradictory testimony for which each accuser was paid millions of dollars. If our system of justice is remotely as fair as we like to pretend that it is, he will get a new trial.

However, because of the extraordinary political and media realities of this case, I doubt that will ever happen and that these recordings will be the last time you hear the likely truth of this case from a man who will die in prison for crimes for which there is no hard evidence he committed them.

First phone interview conducted from prison with Sandusky in 2013

Second phone interview done the next day (This interview includes an attempt by me, under the guidance of former FBI sex crimes expert Jim Clemente, to get Sandusky to confess. Clemente had promised it would be successful if I followed his plan, which I did. While I did get an odd response, there was no confession.)

[Screengrab via The New York Times]

John Ziegler is a nationally-syndicated radio talk show host and documentary filmmaker. You can follow him on Twitter at @ZigManFreud or email him at [email protected]