Dylann Roof Chuckled During Confession: ‘Well, I Killed Them, I Guess’ 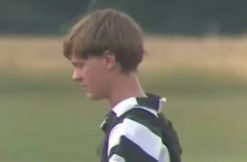 The federal murder trial against Dylann Roof continues. On Friday, the jury saw his videotaped confession to the FBI, which was recorded shortly after his arrest.

He reportedly began the interview vaguely admitting to shooting and killing nine people at the Emanuel African Methodist Episcopal Church in Charleston, South Carolina. Agents asked him to clarify himself, and he did.

“Well, I killed them, I guess,” he said, chuckling.

Roof faces 33 counts. His defense team has admitted that he did it and was willing to plead guilty, but they want the death penalty taken off the table first. Then there’s the matter of a state trial, scheduled to begin in January, 2017.

Every one of his victims in the June 2015 incident were black, and he was reportedly motivated by racist fears. He said as much in the videotape, telling agents “Somebody had to do something because, you know, black people are killing white people every day on the street, and they’re raping white women.”