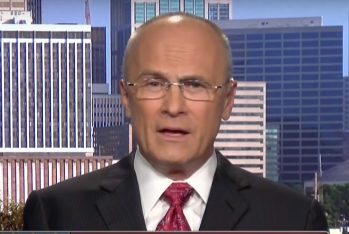 The man President-elect Donald Trump named to serve as his Secretary of Labor, Andrew Puzder, was accused of domestic abuse by his then-wife over 30-years-ago.

The Riverfront Times, a small weekly newspaper and online publication based in St. Louis, MO, brought the matters back to the forefront on Thursday after Puzder’s nomination was announced. The allegations first became public during Puzder’s divorce in 1989 from his first wife, Lisa Henning.

According to the report, Henning’s divorce filings alleged that Puzder struck her, threw her on the floor and disconnected the phone to prevent her from calling police.

Her divorce filings also detail two additional alleged incidents of abuse between the late 1970s and 1985.  During the 1970s incident, Henning claimed a neighbor called police to report an alleged fight that involved her then-husband throwing dishes at her.  The 1985 incident allegedly involved Puzder punching Henning while they were driving the car home from a dinner.

Media outlets also reportedly conducted a review of other court filings in the divorce case, along with deposition transcripts in which Puzder is said to have repeatedly denied all allegations of abuse.

There is apparently one reference Puzder made in court records to touching Henning, but he said it was only done to prevent her from harming herself.

“There was no physical abuse at any point in time,” Puzder told reporters when he addressed the topic back in 1989.

“Andy is one of the finest men I have ever known. Many years ago I impulsively filed for divorce and was counseled to file allegations that I regretted and subsequently withdrew over thirty years ago. Andy is a wonderful father, a great person, and was a good husband.”