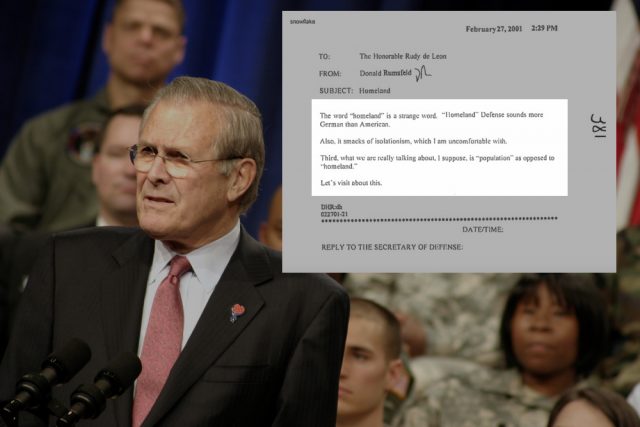 Former Secretary of Defense Donald Rumsfeld was apparently uncomfortable with using the word “Homeland” when it came time to name the Department of Homeland Security (“DHS”) in early 2001, according to recently-obtained documents.

Tagged early Wednesday morning by Lauren Harper on Twitter, the Rumsfeld-composed letter is addressed to Rudy de Leon and dated February 27, 2001. At the time, de Leon served as the Deputy Secretary of Defense (de Leon currently works for Democratic Party think tank, the Center for American Progress). Rumsfeld’s words read, in their entirety:

The word “homeland” is a strange word. “Homeland” Defense sounds more German than American. Also, it smacks of isolationism, which I am uncomfortable with. Third, what we are really talking about, I suppose, is “population” as opposed to “homeland.” Let’s visit about this.

Harper is an author, artist, and researcher who currently works as the communications director for George Washington University’s National Security Archive.

In a lengthy article titled “Rumsfeld Snowflakes Come in from the Cold,” Harper’s colleague Nate Jones explains how the documents contained in the latest Freedom of Information Act (“FOIA”) release are not technically referred to as letters, but rather are known as Rumsfeld’s so-called “snowflakes.” Jones describes the Rumsfeldian snowflake concept thusly:

[A] snowflake [is the] the term used to describe [Rumsfeld’s] usually one-page, often one-sentence, memos that he sent to his underlings to ask a question or issue an instruction.

It’s unclear what, if any, came of Rumsfeld’s concerns over the German-sounding terminology. The Department of Homeland Security was established (and named as such) with the passage of the Homeland Security Act of 2002 on November 25, 2002. Rumsfeld apparently held his tongue, however, later telling reporters that the idea behind DHS was a “good one for the country.”

Aside from Rumsfeld’s labeling concerns, the letter to de Leon has raised some alarm bells due to its date. Sent on February 27, 2001, it appears to suggest the George W. Bush administration had been discussing the establishment of the DHS well before the 9/11 terrorist attacks.

If true, that’s semi-huge news–especially as it relates to an administration even more egregious with their truth-telling than the current one.

Law&Crime reached out to Harper for some insight on the curious dating of the Rumsfeld letter.

She replied, via email, “I can’t speak to when exactly the Bush admin started considering forming DHS; the subject of our FOIA lawsuit was Rumsfeld’s snowflakes and responses to them…As far as that particular snowflake, I’m not positive what [Rumsfeld] was responding to. But we are supposed to receive releases from DOD every month and we will continue to publish them as we get them.”

For all of the documents so far obtained by the National Security Archive, see here.

Editors note: this article was amended to clarify the author of the article quoted above.