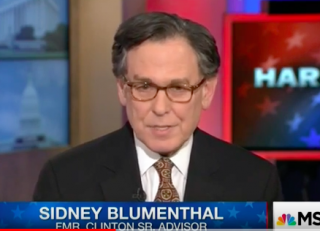 Oops. Democrats, who preemptively released their Benghazi committee response report, accidentally released portions of a redacted transcript that revealed the absurd amount of money that Clinton aide Sidney Blumenthal received as part of his consulting work with pro-Clinton organizations.

The Los Angeles Times was able to easily erase some of the redaction marks, and found “the transcript portion reveals some unflattering things for any partisans on the committee, Republican or Democrat.” The newspaper claims it shows that Republicans used their subpoena power to question Blumenthal about his financial arrangements with David Brock, who is the founder of the left-leaning Media Matters.  In the transcript, Blumenthal admits to receiving about $200,000 dollars from Media Matters, and David Brock’s other organizations to basically just give advice.

Here is a portion of the transcript that the LA Times recovered:

Q: Did you ever receive any payment from an organization called Media Matters?

A: Oh, yes. I did — I did receive payment in that period from Media Matters.

Q: Okay. And what was your relationship with Media Matters at that time period?

A: I was a consultant to Media Matters. I’m sorry I—

A: I overlooked that.

Q: When did you become a consultant for Media Matters?

Q: Okay. And how did that come about, that you became a consultant for Media Matters?

A: I have had a very long friendship with the chairman of Media Matters, whose name is David Brock, from before he founded this organization, and I have sustained that friendship. And he asked me to help provide ideas and advice to him and his organizations.

Q: Does that continue to this day?

Q: Okay. And what is your salary or your contract with Media Matters?  How much money are you earning from them?

Q: And has that been roughly consistent from when you began receiving payment from Media Matters?

*[redacted due to Chairman Gowdy’s refusal to allow release of transcript].