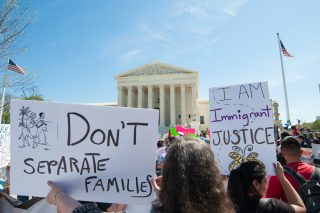 Donald Trump‘s inauguration this Friday is causing trepidation among the U.S. immigrant population, given Trump’s expressed desire to get tougher on deporting undocumented aliens and criminals. A case that is having oral arguments before the Supreme Court on Tuesday,  Lynch v. Dimaya, could have a widespread, lasting effect on deportation policies moving forward.

Current immigration law says that any alien who’s convicted of an “aggravated felony” is automatically subject to deportation. There’s a long list of definitions for what constitutes an aggravated felony, including any offense classified as a “crime of violence” under 18 U.S.C. §16(b), which is pretty broad. Section 16(b)(2) of that law says that not only do actual violent crimes qualify, but “any other offense that is a felony and that, by its nature, involves a substantial risk that physical force … may be used” is also included. This definition, known as the “residual clause,” means that even if no violence is used, attempted, or threatened during a particular crime, it could still qualify and the offender would be deported.

This was the situation in the case that’s going before the Court on Tuesday, Lynch v. Dimaya. James Garcia Dimaya, born in the Philippines, has been in the United States as a legal permanent resident since 1992. Dimaya has two California burglary convictions on his record, and the deportation statute kicked in, because a judge ruled that burglary is a “crime of violence,” by nature of it having a “substantial risk” of physical force. Burglary, by definition, doesn’t require any violence, but apparently, because violence could happen during a hypothetical burglary, that’s enough for the judge to deem it a crime of violence, and thus, and aggravated felony that triggers deportation. One fascinating wrinkle in this case is that “burglary” is one of the specifically listed aggravated felonies that would trigger deportation, but the California burglary statute has different elements than the federal one, so the Board of Immigration Appeals ruled that it didn’t qualify as a burglary for immigration purposes. Despite this, the Board still ruled that Dimaya’s offense qualified as a “crime of violence,” due to its “substantial risk of force,” so he was still subject to being deported.

Dimaya is now bringing his case before the Supreme Court, arguing that the law’s definition of “crime of violence” is unconstitutional because it’s too vague. The “residual clause” in the statute doesn’t detail what crimes are or aren’t included, and Dimaya argues that this violates due process requirements by not informing people what crimes trigger deportation.

The government is arguing that vagueness is only grounds for ruling criminal laws unconstitutional, and that while this case centers around definitions of crimes, it’s really a civil immigration case, involving a civil law’s definition of crimes. Technical stuff, but it’s a fair point.

Still, Dimaya claims that the Supreme Court has long used the vagueness standard when dealing with civil cases with “severe consequences” like deportation.

If the Supreme Court rules in Dimaya’s favor, that would mean that resident aliens convicted of crimes that would presently fall under the residual clause would potentially no longer be subject to mandatory deportation. Of course, that’s under current immigration law. It remains to be seen whether President-elect Trump will look to create tighter standards for deportation. However, doing so would be easier said than done, and who knows how long it would take for Trump to accomplish this. In a statement sent to LawNewz.com, Cornell University Law Professor Stephen Yale-Loehr noted that Trump may find it more difficult than expected to push some of his plans through. “Sound bites on the campaign trail often prove hard to actually carry out,” Prof. Yale-Loehr said. “As President Obama and other presidents before him found out, Congress and federal agencies often act at a snail’s pace.”