Dallas Sniper Opens Fire: What are the Gun Laws in Texas? 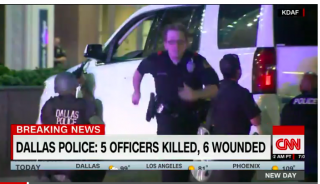 In the most deadly attack on law enforcement since September 11th, at least one sniper opened fire, killing five police officers, and injuring 7 others. The Dallas Police Chief said one suspect was killed by police. Witnesses report he was armed with some type of rifle, and reportedly had ammunition falling out of his pocket.

The type of weapon that the shooter used is unknown, but there is little doubt that talk will immediately turn to gun laws, and reform. Texas has some of the most lax gun laws in the country. You do not need a state permit to purchase one and you are not required to register it with the state either.  In fact, a new Texas law went into effect in January allowing residents to openly carry a handgun with a concealed weapon permit. In addition, long guns (rifles / shotguns) do not have to be concealed, but must be carried in a way “not calculated to cause alarm.” This might have caused confusion Thursday night when Dallas Police misidentified a man as a suspect because he was carrying a large weapon and dressed in camouflage. (Again he is not the suspect)

The man was released after turning himself into authorities. The man’s brother said he was just exercising his Second Amendment Rights.

“He never thought that by exercising his right, he’d be plastered over the national media as a suspect,” Cory Hughes said, according to CBS News.

There is also no waiting period to buy a weapon in Texas. Texas abides by Federal laws, which has no restrictions on assault weapons included AR-15 and other high powered weapons.

No state license is needed to possess a rifle, shotgun or handgun. There are restrictions if the person is convicted of a felony or a Class A misdemeanor.

Here are the limitations for getting a concealed carry license:

1) is a legal resident of this state for the six-month period preceding the date of application under this subchapter or is otherwise eligible for a license under Section 411.173(a);

(3) has not been convicted of a felony;

(5) is not a fugitive from justice for a felony or a Class A or Class B misdemeanor or equivalent offense;

(6) is not a chemically dependent person;

(7) is not incapable of exercising sound judgment with respect to the proper use and storage of a handgun;

(9) is fully qualified under applicable federal and state law to purchase a handgun;

(10) has not been finally determined to be delinquent in making a child support payment administered or collected by the attorney general;

(13) has not, in the 10 years preceding the date of application, been adjudicated as having engaged in delinquent conduct violating a penal law of the grade of felony; and

(14) has not made any material misrepresentation, or failed to disclose any material fact, in an application submitted pursuant to Section 411.174.

A new gun law that is scheduled to go into effect in just weeks allows people to carry guns on campus and in the classroom.