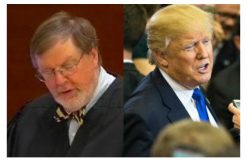 President Donald Trump has very strongly criticized the decision of a federal judge in Seattle who issued a temporary restraining order [TRO] covering his new executive order [EO] regarding immigration.

This order, and others like it relating not only to refugees but also, for example, to Obama’s order granting semi-permanent residency status to millions of illegal aliens (halted by the 5th Circuit), raise several legal concerns which cry out for correction since they are likely to get even worse in the future.

While I think that Trump and others – including my colleague Professor Jonathan Turley – are correct in criticizing the ruling by U.S. District Judge James Robart on several different legal grounds, it’s clear that Trump’s attack on the judge (not the ruling) was unwarranted, unwise, and unfair.

Here’s why I think Robart’s ruling is wrong:

FIRST, it’s doubtful that a state (in this case Washington) has standing to raise legal and other constitutional claims on behalf of its own citizens (parens patriae), much less on behalf of non-citizens in other countries seeking to enter the U.S.

Its claim of “injury in fact,” required by the Constitution for legal standing, is highly speculative and far from direct, and in part involves the actions of third parties which make achieving legal standing even more problematic.

By the way, I know something about legal standing, since I put together one of the leading Supreme Court cases on environmental standing [SCRAP], was granted standing to force an attorney general to seek a special prosecutor, achieved standing to force broadcasters to provide free time for antismoking messages, was able to bring a law suit – over the objections of the state of Maryland – which forced Spiro T. Agnew to repay the money he took in bribes, etc.

SECOND, a long line of cases, under what is called the Plenary Power Doctrine, makes it plain that many constitutional protections do not apply to foreign citizens outside our borders.

That’s in large part why my detailed legal analysis concluded that even a complete and total ban on admitting any and all Muslims would be constitutional, since they do not enjoy the protection of the Equal Protection Clause which generally prohibits discrimination on the basis of religion.

THIRD, the U.S. has banned – or at least delayed the entry of – foreigners on the basis of nationality many times, including decisions by President Jimmy Carter and others. It would be hard to conclude that all of these prior actions were unconstitutional.

FOURTH, the President has clear statutory authority under 8 USC 1182(f) which provides that “Whenever the President finds that the entry of any aliens or of any class of aliens into the United States would be detrimental to the interests of the United States, he may by proclamation, and for such period as he shall deem necessary, suspend the entry of all aliens or any class of aliens as immigrants or nonimmigrants, or impose on the entry of aliens ANY RESTRICTIONS he may deem to be appropriate.” [emphasis added]

Indeed, as the Ninth Circuit (which includes Seattle) has held, “that statute specifically grants the President, where it is in the national interest to do so, the extreme power to prevent the entry of any alien or groups of aliens into this country as well as the lesser power to grant entry to such person or persons WITH ANY RESTRICTION on their entry as he may deem to be appropriate.” [emphasis added]

BY THE WAY, since the president, instead of simply banning entry, may in the alternative impose “any restrictions he may deem to be appropriate,” Trump may want to consider doing what Germany is about to do, and Norway is considering: instead of banning people who cannot be completely vetted, he could simply require them, as a condition of entry, to wear ankle bracelets to permit them to be inexpensively and effectively monitored around the clock by using GPS.

In any event, although I am very critical of the judge’s TRO ruling, including also the vagueness of his order, I think Trump’s comment that “the opinion of this SO-CALLED judge, which essentially takes law-enforcement away from our country, is ridiculous,” is unwarranted, unwise, and unfair. [emphasis added]

It is unwarranted because there is nothing whatsoever to suggest that James Robart is somehow not a real judge, that he holds office improperly, or that he acted outside his judicial role in issuing the order. Attacking a judge’s order is perfectly proper, but attacking a judge’s legitimacy, just as Trump earlier attacked a federal judge’s ancestry, is clearly improper.

Such attacks are also very unwise. While judges are supposed to be entirely impartial and dispassionate in their rulings, they are also human. At least some judges – including those on the 9th Circuit – may take offense when one of their own is unfairly attacked by a president, and this just might affect their rulings on future cases involving the President, including the appeal of this TRO ruling.

Finally, it is very unfair for President Trump to issue a personal attack on a sitting federal judge.

As objectionable as his personal attacks on political opponents or activists who oppose him may be, these individuals at least have the option of replying, and replying effectively in a public forum, by speaking before a congressional chamber or congressional hearing, in a press conference, as a guest on a TV news program, on any number of talk radio programs, issuing a statement, etc.

But both judicial ethics and long standing tradition generally prohibit a sitting judge from responding, in a public forum or otherwise, to criticisms of his rulings, and especially to personal attacks. Attacking someone who cannot fight back is considered unfair and perhaps even un-American.

Let me also suggest that the controversy over Judge Robart’s TRO may indicate at least two more important legal procedure problem which are likely to continue to reoccur.

FIRST, before the judiciary can issue an order which effectively shuts down a major program initiated by the president himself, perhaps something more than a brief hearing before only one judge – who may well have been chosen, in a process known as forum shopping, for his leanings or even biases – should be required.

Prior to 1976, three-judge courts heard all actions seeking to enjoin enforcement of state and federal laws as unconstitutional. Perhaps some similar mechanism should be established to limit the power of a single judge to shut down a major program established directly by the president.

Moreover, in a situation such at this involving an EO with national impact, which is being attacked before almost half a dozen different federal district judges simultaneously, with each able to issue orders which may be vague and even contradictory, perhaps there should be a judicial mechanism for coordinating if not consolidating them – such as there is today for many class-action law suits.

Both of these proposed remedies would limit forum shopping, possibly inconsistent rulings, and minimize other problems.

Let’s plan ahead; there will probably be many more such problems before the end of Trump’s presidency.